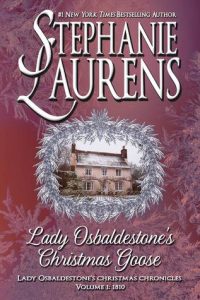 A whimsical Christmas-themed tale, involving a missing flock of geese, some badly-behaved gentlemen, some well-behaved children, a reluctant lord and one very determined grandmother. It’s a light-hearted and entertaining read, and if the problems are resolved rather too easily and the characters are a little too wholesome, that’s in keeping with the spirit of the festive season.

Here’s the premise: widowed Lady Osbaldestone has moved into her dower property of Hartington Manor and is looking forward to Christmas with her daughter and family, only to have her plans disrupted. There’s mumps in the household, and Lady O has to take care of her three grandchildren over Christmas. She’s never had to look after small children before (that’s what servants are for), and they get into a certain number of adventures (along the lines of ‘We wondered what would happen if…’). But when the village’s flock of geese, earmarked for Christmas dinner, disappears, that’s a mystery grandma and grandchildren can unite to solve.

Along the way, they discover Miss Eugenia Fitzgibbon, struggling to keep her brother and his rather wild friends out of trouble, and Lord Longfellow, reclusive because of a disfiguring war injury, and decide that a little match-making will be just the thing.

Everything turns out pretty much as you’d expect, but the match-making and sleuthing antics are quite ingenious, and there are all the usual events of Christmas as well – decking the halls, the carol service, the nativity re-enactment and the skating party. A lot of this felt very Victorian rather than Regency, but it didn’t matter. The children were surprisingly grown-up for their ages, but that didn’t matter, either.