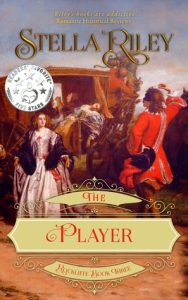 An awesome read. The author has a genius for putting her characters into an almost impossible-to-resolve situation and then leaving them to wriggle out of it as best they can. This worked perfectly in The Parfit Knight, but it’s just a shade less successful here.

Here’s the premise: the Earl of Sarre is forced to return from a ten-year exile in France to take up his role as head of the family after both his father and his brother have died. He doesn’t want to, and his mother certainly doesn’t want him home, but duty calls. There’s only one problem: the reason for his exile, a huge personal tragedy and accompanying scandal, mean that society may not accept him, and that makes it tricky to fulfil at least one of his obligations, that of marrying. He still has friends, however, as well as one huge advantage – he’s an actor of incomparable talent, a skill he can use to guide him through society and provide a mask he can hide behind.

Caroline Maitland is a wool merchant’s heiress, in London to make an advantageous match but she’s not finding it easy. Her fortune makes her a target for plausible rogues, and when one of her suitors is Sarre’s mortal enemy, she falls under his vengeful gaze. And Sarre finds himself drawn into a spider’s web of deceit that leads them both into a terrible dilemma.

My main problem with this is a suspension of disbelief issue. For the plot to work at all, it’s necessary for Caroline to not realise something highly significant, and frankly, I never quite bought into that. It just seemed to be a stretch too far. I also disliked the lengths to which Sarre went before telling her exactly what was going on. There were several points at which he should have come clean, but I suppose that was part of his character – hiding behind one or other of his acting personas and never actually being the real man behind the disguises. He’d been acting a part for so long that he no longer knew who or what he was, and that at least was believable.

I have a quibble about the Duke of Rockliffe, too. I know the series is named for him, so he’s in every book, but he’s too much of a magical McGuffin for my taste. He sees all, knows all, understands all and miraculously appears just when he’s wanted to save the day. It’s all just a bit too convenient. However, it’s his series and he’s a cool character so I can live with it.

Ultimately, however implausible it might have been underneath, the way the characters deal with the circumstances in which they find themselves is twelve shades of awesome, and utterly satisfying. I love this author’s creativity, and boy, can she write. A very enjoyable five stars.