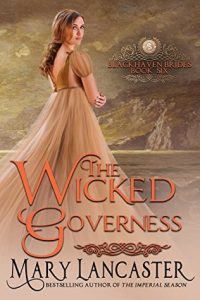 Mary Lancaster’s books are always entertaining, so I knew I’d enjoy this right from the start. There was less in the way of piracy and other shenanigans in this book, which is very much a plus for me, and the romance, while a little insta-lust, is still very well developed.

Here’s the premise: Caroline Grey, the governess at Braithwaite Castle in the previous book, is summarily dismissed for an alleged misdemeanour, finding work at the sinister Haven Hall instead. Her pupil is mute, but not physically, so it’s presumed there’s been some traumatic incident. Also at Haven Hall is the slightly bonkers aunt and the child’s darkly mysterious father, Javan Benedict. When Caroline arrives, the family is very reclusive, so needless to say, she attempts to draw them out into society. They are surprisingly willing (well, the book would be quite dull if they weren’t), and so they are, inch by reluctant inch, rehabilitated.

Caroline is a likable character, and although she’s the wicked governess of the title, there isn’t really anything wicked about her, except in the fevered imaginations of some Blackhaven residents. She does have some family issues, but they aren’t terribly dramatic.

Hero Javan, on the other hand, has a whole shedload of issues. We’re into Beauty and the Beast territory here, since he’s the wounded and scarred beast to Caroline’s beauty. I’m not a huge fan of the instant hots for each other scenario, but it’s something of a feature in Lancaster’s work, so I’m used to it by now. There’s also some fairly physical lusting and one graphic sex scene, so traditionalists beware.

There isn’t anything wildly original about the plot, and readers can work out almost from the start how it’s going to go, but it’s nicely done, as always, it feels believably Regency, and there’s enough action to sweep the plot along without overwhelming the romance. I liked Caroline a lot, and although I had less patience with Javan, I understood his reluctance to commit himself. Honourable mentions for Rosa, the mute daughter, who was a wonderful character in her own right, and the mischievous cousin, Richard. I hope we see more of him (and I’m likely to get my wish, because the author loves to bring in characters from previous books).

Great fun, and a nicely written book that fulfils all expectations of the series without becoming boring. Four stars.