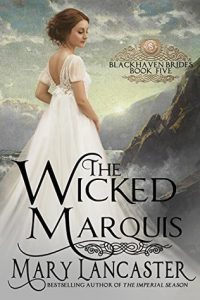 Every Mary Lancaster book is a cracking read, and this is no exception. A spirited heroine, an unusual but very hot hero, a one-look-across-a-crowded-room insta-love (although it was an orchard in this case), loads of passionate kisses and a whole heap of shenanigans of the smuggling/spies/thieves variety. It’s all very entertaining, and for those who enjoyed the first four books in the series, this is more of the same. For myself, I’d have liked a little bit of variety on the basic plot, and there were several loose threads left dangling, but it was still a great read.

Here’s the premise: Lady Serena Conway, sister to the Earl of Braithwaite, has been sent home from London to Blackhaven after the disgrace of jilting a dull but respectable baronet. Stuck at Braithwaite Castle with only her younger sisters and their governess for company, and strictly forbidden from venturing into society, she’s soon bored witless by her captivity. But then she spies an odd looking man from the window, entering the castle’s orchard. And naturally, she rushes out to find out who he is.
He turns out to be the impoverished Marquis of Tamar, although it’s some time before Serena learns who he is, and so we have the amusement of her thinking the scruffy painter who treats her with casual friendship will be shocked when he realises who she is, when in fact she’s shocked to discover he outranks her. But he’s wildly ineligible, being completely broke, and somewhat disreputable.

Needless to say, as is pretty usual with Mary Lancaster’s books, the two are magically drawn to each other from the start, and are soon sharing passionate kisses, described in some detail. But of course there’s always an obstacle, and Tamar’s past soon comes back to haunt them.

There are no fewer than three dramatic subplots – some mysterious goings on in the castle cellar, the theft of some of Tamar’s paintings and a bailiff who’s hanging around him, even though peers of the realm can’t be thrown into a debtor’s prison. The first comes to the boil quite early in the book, the second is very easily solved and the third seemed to fizzle out after the bailiff was given a bit of a talking to. Or maybe I missed a vital point, I don’t know. There were a couple of other dangling threads that puzzled me. One was the cheerful actress who helps Tamar out and seems to be there merely to throw Serena into a bout of jealousy, but he never seemed to explain it properly to her. Again, maybe I missed it. The other weird part was the collection of jewellery dumped on Tamar at an awkward moment. What was that all about? I clearly missed the point of that entirely. But then these books always have so much going on that it’s very easy to get swept up in the excitement and read so fast that details just whizz by.

The romance… I don’t know why, but it didn’t grab me. I’m not a big fan of insta-love, or of well-brought-up young ladies who immediately fall panting into the arms of the most unlikely characters, and somehow, despite the nicely drawn descriptions of Serena’s feelings (the author does this so well), somehow I wasn’t convinced. Perhaps it was because, compared to some of the previous Blackhaven heroines, Serena felt rather ordinary. Or perhaps there was so much else going on that the romance felt a bit rushed. Tamar, on the other hand, is rather a charmer, completely open about his admiration, and so swept up in his obsession that he has to paint her instantly, now, this very minute.

Of the other characters, there are quite a few popping up from the earlier books. It’s not necessary to have read them, but it would have been handy to have a little guide to remind me. The Dowager Countess was the usual type, fairly stiff and a bit domineering. Serena’s brother Braithwaite was an interesting character, although his switch from dead against the marriage to let’s-call-the-banns was breathtakingly swift. I loved the reason for it though (which I won’t spoil the surprise by mentioning). And I loved the children, and long-suffering Miss Grey, their governess.

Another rattling good yarn in this series. Four stars, and since the next book is about the governess, I’m going to have to go straight on to that.