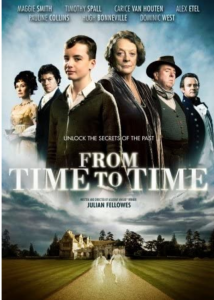 This is an interesting curiosity, a time-slip story jumping between late World War II England and the Regency era. The plot is simplistic, but the acting is generally superb and it’s a pleasant way to pass an hour and a half.

Here’s the premise: teenager Tolly is sent to spend Christmas with his grandmother while his mother waits for news of his missing-in-action soldier father. Granny lives in impoverished aristocratic style with her two remaining servants in a crumbling old manor house set in a vast estate, and lo and behold, Tolly immediately starts seeing ghostly apparitions as he moves around the house. At first, it’s just the daughter of the house, Susan, who’s blind, but gradually he starts seeing more of the inhabitants of the Regency house, and discovers that he can travel between the two time periods. Slowly, the story emerges of the events leading up to a terrible fire which destroyed one wing of the house, and how all the family jewels and silver were lost.

Tolly’s adventures are the bulk of the story, but there are little vignettes amongst the other characters that should have added flesh to the bones, but somehow felt simplistic and unfinished. The wife in the Regency era is a case in point. Essentially abandoned by her naval captain husband, despised as a foreigner by the local aristocracy whom she avidly pursues, bored, lonely and miserable, she gets little sympathy from the scriptwriters, who portray her as merely fretful and selfish. Her husband apologises to her, but fails to suggest any solution to the problem. I would have liked a little more depth to her character, and perhaps some reason offered for her behaviour. Maybe she just resents being stuck in the country when he’s away all the time?

The Negro boy is another interesting but underdeveloped character. The captain brings him home to be a sort of guide-person for his blind daughter, to help her get about and describe what she can’t see. Negroes were very popular employees in the Regency, both as page boys and as adult servants, so this is true to the era, and his bravery and initiative in a crisis was nicely drawn, but I felt he fitted too easily into the household of a well-to-do family for a runaway slave. Where did he learn such excellent manners? Again, a little too simplistic.

However, there’s so much to like about this film that it’s churlish to expect perfection. The cast list is stellar, with the likes of Maggie Smith, Hugh Bonneville, Pauline Collins, Timothy Spall and Harriett Walter setting the standard. Alex Etel was excellent as the puzzled but game Tolly, and Kwayedza Kureya was a heroic Jacob. I wasn’t convinced by Eliza Hope Bennett as the blind Susan, though, but it’s a difficult role.

The costumes were suitably drab in the wartime scenes and gorgeous in the Regency, and ditto the house. In fact, the manor house was a wonderful character in its own right, just perfect for the story, and the distinction between the polished brightness of the Regency and the faded and decaying wartime version was beautifully done.

If I were giving star ratings for this, it would probably be a three. I enjoyed the acting, the costumes, the settings and the evocation of the two historical eras. I was less enamoured of the plot and character development, but I understand this is based on a book which might bring greater depth to the story. Entertaining but not memorable.