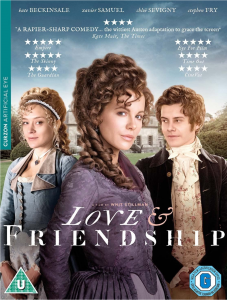 This is based on Jane Austen’s early work, Lady Susan, which I’ve never read, so I’ve no idea how faithful it is to the original. Reviews have been mixed, to say the least, and although I’ve watched it twice now, I’m still not quite sure what to make of it. It’s rather enamoured of its own cleverness (each of the characters is introduced with a witty little description, but there are far too many of them for this to be helpful for anyone who’s not read the book), but it’s utterly beautiful to look at, so when the whole thing gets overwhelming, the confused viewer can simply sit back and enjoy the spectacle.

Here’s the plot: impoverished widow Lady Susan Vernon is living a hand-to-mouth existence bouncing around the homes of various relatives, while trying to marry off her daughter, Frederica. When she is turfed out of one home because of a fling with her hostess’s husband (very bad manners!), she lands up at Churchill, the home of her husband’s brother. Here she meets her husband’s brother’s wife’s brother (are you keeping up?), Reginald deCourcy, and sets out ostensibly to attach him to her daughter, but actually succeeding in making him fall for her. Meanwhile, her daughter’s bonkers suitor, Sir James Martin, arrives in hot pursuit. Oh yes, and there’s an American friend of Lady Susan’s, whose sole purpose seems to be to be the recipient of Lady Susan’s innermost thoughts. Presumably the original was epistolatory, but she feels a bit superfluous here.

Let me say right away that Kate Beckinsale is utterly brilliant as Lady Susan. It helps that she has all Jane Austen’s wit to work with, and in some respects she reminds me of Mary Crawford from Mansfield Park, incredibly clever and witty, but also cynical and horribly self-centred. But charming. Oh so very charming. Reginald is captivated, and who can blame him, but his sister sees right through Lady Susan and tries desperately to steer him away. It takes a major catastrophe to open his eyes to the truth.

Of the rest of the cast, no one particularly stands out, but they were uniformly excellent, so no complaints there. I wondered a little at the American friend’s accent, which veered into Irish to my ears occasionally and sometimes was downright incomprehensible, but it didn’t much matter (see remarks above about enjoying the spectacle). The daughter was amusingly prone to running away, the bonkers suitor was over-the-top silly and the slighted wife was even more over-the-top hysterical, but they were an interesting counterpoint to Lady Susan’s calmly outrageous manoeuvrings, which she made to seem oh so rational and even sensible. Because this is an early work by Austen, the characters are perhaps not as smooth as in her later works, but the neat plotting and her trademark wit are on full display.

The setting is pre-Regency, somewhere in the 1790s, so the women wear beautifully draped fuller skirts and lacy shawls, and spectacular big hats. I was less enamoured with the hairdos, since all the women wore identical styles, married or single, outgoing or demure. The men look very Mr Darcy, which is perfectly acceptable, and the houses are Georgian era, which means classically elegant.

On the whole, I enjoyed this very much, and will certainly watch it again. After another three or four times I might even fully understand what it’s all about. But hey, the spectacle!