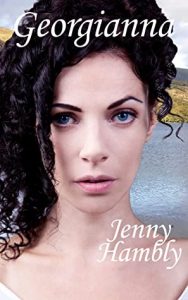 I really think that Jenny Hambly gets better and better with every book. I’ve always enjoyed her work, but there’s a polish to her writing now that makes the story shine. This is a classic story of a daughter failing to follow the wishes of her family and being sent away in disgrace, to find that she blossoms in the new setting and finds out who she really is. And (naturally) finds true love, of course.

Here’s the premise: we met Lady Georgianna Voss in book 1 of the series (Marianne) leaving Miss Wolfraston’s Seminary for Young Ladies with her two friends. Marianne was the hoydenish one, and Charlotte the quiet, timid one. Georgianna is the repressed one, browbeaten by her domineering and impossible-to-please mother, and ignored by her largely absent father. Her younger brother is the apple of her mother’s eye, while Georgianna is never meek enough or dutiful enough to please her mother. When she refuses the eligible but dull man her mother has chosen for her, she is banished to the home of her aunt in the Lake District.

I have to say that Lady Westbury (her mother) is a real piece of work. She’s trapped in a loveless marriage herself and she seems determined to force Georgianna into the same unhappy state. I really felt for Georgianna, whose home life is so unhappy that she’s nauseous when she arrives home, and whenever she’s summoned to see her mother. And yet she has the confidence to speak up for herself, even though she’s terrified.

The aunt, Lady Colyford, is a different kettle of fish altogether. She lives in eccentric semi-wildness by Buttermere lake with her two companions, one slightly bonkers and the other more practical. In this self-sufficient all-female environment, Georgianna thrives and begins to blossom.

Our hero, meanwhile, is Alexander Knight, unexpectedly heir to a dukedom after his older brother drowned in Buttermere. When a local girl claims that her child was fathered by the brother, Alexander sets out incognito to uncover the truth about it, and of course the complications arising from that are not hard to see.
There’s one other character of significance – Lord Allerdale, the wild pal that Alexander’s brother was visiting when he drowned, and the last person to see him alive. Needless to say, he takes an interest in Georgianna, and leaves her with an interesting dilemma – should she choose the smooth but rather ramshackle Lord Allerdale, who’s a suitable match for her? Or should she settle for the unassuming Mr Knight, seemingly well below her station in life, but very much on her wavelength?

To be honest, there isn’t anything terribly unexpected here. Allerdale turns out to be roguish but not beyond the pale, Georgianna resourcefully rescues herself from difficulties, sensible girl that she is, and Mr Knight is fortuitously revealed as being of a rank that even Mama must approve. In some ways, it would have made a more interesting story if she had really fallen in love with a mere gentleman, instead of a future duke, but there we are. This is not that story.

To round things off, the question of the illegitimate child is resolved to everyone’s satisfaction, and there are resolutions and rapprochements for several minor characters, to tie everything up with a whole array of neat little bows. And the romance ends in fine style. There aren’t too many emotional fireworks here, but that is totally in keeping with Georgianna’s character. I loved watching her find her own strength of character, and face up to her mother at the end, and Alexander is definitely my sort of hero. I also loved the well-evoked setting of Buttermere. I’ve never been there but I could visualise it perfectly. A quiet but eminently enjoyable story. Five stars.