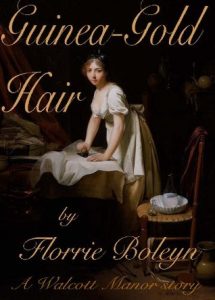 This was a delightful surprise. Most Regencies focus on the upper classes, the gentry and nobility, and servants are merely background characters, but not here. The star of the show is Jenny, the daughter of a miller, who goes off to the local big house as a nursery maid to tide her family over a patch of bad harvests. The daughter of the house, Miss Marianne, takes a shine to Jenny, and whisks her off to London to be her lady’s maid for her come-out. Jenny finds herself helping her mistress to evaluate the possibilities of three very different suitors, Geoffrey the steady rural gentry, purse-pinching Percy and the suave, sophisticated but rather dangerous Lord Vincent. Meanwhile, Jenny herself is making eyes at Thomas, one of the grooms.

The opening chapters, at the mill and then Jenny’s early days at Walcott Manor, are beautifully and lovingly evoked, with a huge amount of convincing period detail. It’s so rare to see the lives of the working classes drawn with so much conviction. The London scenes were a little less sure. The soot-grimed buildings and street atmosphere were well done, but I don’t believe for one minute that the family’s rented house (’one of the smaller townhouses’) would have had its own ballroom. Only the grandest houses could manage that. Most people either rented assembly rooms (you could rent Almack’s!) or threw open doors to make one large room out of two or three smaller ones.

I rather liked the three suitors, but especially Lord Vincent, who for all his rakish and bad-boy ways was definitely hot, even if (sadly) not marriage material. We don’t see much of Marianne’s hectic social whirl, it’s all second-hand, as she describes events to Jenny afterwards. We also don’t see much of Marianne’s mother, who should be watching her daughter like a hawk and patently isn’t, and it’s Jenny who ends up as Marianne’s confidante and adviser, and acting as a go-between for Marianne and her suitors.

Now, none of this is realistic, of course. The very idea of taking an untutored country girl to London for anything as important as a girl’s first season is bonkers, no matter how well she dresses Marianne’s hair. Nor is it sensible for the maid to set about evaluating suitors. That’s what Marianne’s mother was supposed to be there for. And I wasn’t at all comfortable with Jenny’s behaviour sometimes. Exchanging kisses for money is a very slippery slope. However, this is more of a fairy tale than a realistic Regency, so I can cut it some slack.

The ending, despite some hiccups along the way, is the terribly implausible but heart-warming expected happy ending, where everyone gets a prize, even the miller. I felt a bit sorry for the original lady’s maid back at the Manor, who was left behind when everyone else went off to London, uncertain of her future, and with a ‘follower’ that she would probably have to wait years to marry. Jenny certainly seemed to have all the luck. There’s no actual sex depicted, but the characters do get quite hot and bothered (Jenny is a country girl, after all, not a simpering miss).
A beautifully written and original Regency-with-a-difference which I loved, marred only by a bit of wayward punctuation and a few typos. Five stars.

Finally, I loved this postscript by the author (with sentiments I share!):