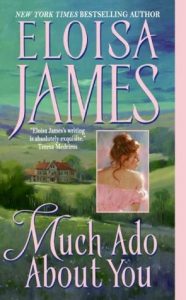 Well. My first Eloisa James and I’m not at all sure what to make of it. It’s a bit of a muddle, the main characters are swamped by side stories, there’s not a drop of common sense in any of them, it veers from farce to tragedy and back again and then ties up the ending so swiftly I almost blinked and missed it. And despite all that, I read it avidly, and found it (mostly) great fun, if I didn’t think too deeply about any of it.

Here’s the premise: an impoverished horse-mad Scot has died and left his four unmarried daughters (Tess, Annabel, Imogen and Josie) to the guardianship of an equally horse-mad casual acquaintance, who happens to be the Duke of Holbrook. He good-naturedly takes them on, a little surprised to find they’re grown up and not the nursery babes he was expecting, and sets about finding them husbands. He has two of his equally horse-mad friends staying with him, the Earl of Mayne and Lord Maitland, both of them dissolute and as horse-mad as he is, and a fourth turns up, fabulously wealthy Lucius Felton. So now we have four men and four women…

It isn’t quite as simple as that, naturally, and there’s quite a lot of manoeuvring before the pairs start to settle down. In fact, it’s quite a long time before it becomes clear just who the principal pair is, since all the characters get their full share of screen time, and this does tend to make the main romance feel rather more perfunctory than it should be.

The four sisters are a mixed bunch. Tess, the eldest (and our heroine) is the pragmatic mother figure to her wayward siblings. Annabel is the coldly mercenary one, determined to marry a title, or at least someone very, very rich, having grown up with a father who reduced them to abject poverty. Imogen is the passionate one who’s already in love with Maitland and won’t be deterred from marrying him even though he shows little interest in her and is already betrothed. And fifteen-year-old Josie is the quirky, outspoken one (and by far the most interesting, to my mind).

Of the men, only Rafe, the duke, shows any individuality. He’s in his mid-thirties, still grieving for his older brother, not remotely interested in marriage and spending his idle life, brandy glass in hand, perpetually slightly tipsy. But he’s so good-humoured and genial, and his conversations with Tess were so full of charm, that I half hoped that he was the one she would end up with.

But no. When Mayne randomly decides to marry her (why, why, why? This never made sense), she tamely decides she’ll go along with it, even though it comes out of nowhere. When he begins flirting at the breakfast table ‘Tess put down her crumpet and prepared to be courted.’ Well, OK. I can see that she feels an obligation to her sisters to marry well, but why rush into it after no more than a couple of days’ acquaintance? Especially when she’s already been kissed by the darkly alluring Lucius and feels… well, something for him. But he doesn’t speak up, she accepts Mayne and in no time flat the bishop in the family has arrived, special licence in pocket, and Tess still doesn’t say, hang on a minute… And then things happen, and it’s Lucius she ends up marrying, and Tess tamely goes along with that, too, but at least this time she actually wants to. And all the time, passionate Isobel is off causing mayhem.

When I write it all out like this, it makes even less sense than it did when I was reading it. And you know what? It doesn’t matter a bit, because it’s lively and funny and I never knew quite what was coming next and I just rolled along with it. I didn’t particularly like any of the characters very much, except for Rafe the tipsy duke and Josie the sharp-tongued one, although Lucius grew on me somewhat. Tess I never really got, though, because she was just too doormat-ish to start with and then once she was married she turned into a voracious sex kitten (because yes, there’s a fair amount of sex in this).

Historical stuff? This is not the book to go to for a deeply immersive and period-accurate recreation of the Regency. The characters have supper instead of dinner, lace cuffs which went out of fashion at least twenty years earlier, dine a la russe (individual dishes) rather than a la francais (everything out on the table), and there’s the usual haziness about titles and special licences. Lucius makes his money from ‘playing the market’, which I’m not convinced was a thing in those days (people tended to invest in companies on a long-term basis), but the London stock exchange was in existence, so perhaps.

But again, none of these grumbles really mattered. I enjoyed the read right from the first chapter (where kindly Rafe is stocking the nursery with four of everything so that his four wards never have to wait for their turn, and is amusingly discombobulated to discover they’re all grown up) to the romantic and familial resolution. A fun book, although I’m not sure I care enough about the rest of the ensemble to read more of the series. Four stars.