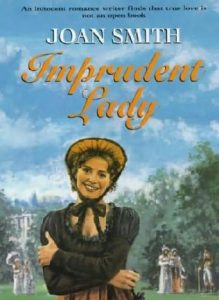 A curious one. On the one hand, this has the liveliest banter between hero and heroine I’ve ever come across – they really are a good match for each other! On the other hand, our hero and heroine are both complete idiots in some ways, he because he fails to recognise that he’s falling in love, and she because she’s constantly overstepping the bounds of propriety, even when she should know better.

Here’s the premise: Prudence Mallow is the impoverished daughter of a deceased clergyman, living a quiet life in London with her widowed mother and her eccentric Uncle Clarence. A chance opportunity to earn a little money copying the work of authors gives her the idea of writing her own novels, which slowly begin to find success and she starts to mingle with other writers. One of them is the handsome rake, Lord Dammler, whose improbably adventurous poems of his world travels have made him the toast of London.

Having a common publisher, naturally the two are thrown together and… well, that’s it, really. Lord Dammler decides he likes Prudence’s books and the lady herself, and starts squiring her about town in his carriage and taking her to balls and the like. And this is where I take issue with both of them, because this is highly improper behaviour. She has a mother who should be chaperoning her at all times, unless she’s in an open carriage, and she absolutely shouldn’t ever be attending a ball with only an unrelated male as her escort. No way. Not even as a twenty-four year old spinster who wears a cap.

Now, to some extent this is all part of the plot. Dammler thinks she’s older and more worldly-wise than she is, and Prue’s throwaway lines, entirely in innocence, are misinterpreted as either great wit or double entendres or both, so she gets something of a reputation as a bit of an original. However, Dammler is better versed in the beau monde than she is, and should be protecting her from these traps. Instead, he treats her very much as he would a male friend, talking about subjects that no single lady should ever be exposed to, and although he sometimes recognises this, it never stops him. And Prue’s mother and uncle seem to unwittingly conspire to push her out into this racy literary and social whirl.

I’m going to be honest, I never really liked Dammler very much. I have no idea how old he’s supposed to be, although I got the impression that he’s still quite young, not far off Prue’s age, but he seems very immature for a man who’s been right round the world, and is a marquis, to boot. He seems to think it’s fine to drive around with Prue during the day, and then spend the evening with his multitude of paramours. Not only is he unbothered by Prue seeing him with his lightskirts, he even tells her about them. Not really hero behaviour. There’s a very silly (and predictable) incident at an inn, where he behaves badly and storms off in a huff like a rebellious teenager. And then at the end, when he’s finally seen the light, having told all and sundry that he’s going to marry Prue, the one person he neglects to tell is Prue herself. So there are several perfectly stupid chapters when he’s swanning around Bath trying to demonstrate that he’s a reformed character while she’s mystified as to why he’s behaving quite out of character.

I think this is meant to be a kind of Georgette Heyer-lite, but it never quite worked that way for me, despite the sly little references (restorative pork jelly, anyone?). Given that Prue is clearly based on Jane Austen and Dammler is a sort of Byron-alike, there are references a-plenty for aficianados, but combined with the references to Almack’s and the various patronesses, a bit-part for the Duke of Clarence, drives in the park and so on, it all felt a bit tired and old-fashioned.

What saves it is two things. Firstly, the banter is superb, both very clever and genuinely funny. And secondly, there’s good old Uncle Clarence. For a side character, he has the sort of towering comic role played by Jonathan Chawleigh in A Civil Contract, in other words, a character who dominates every scene he’s in. And of course this is Joan Smith, so it’s all beautifully written and creates a very believable Regency setting. Since, despite all my grumbles, I read it avidly, I’m going to be generous and round up to four stars.

I have to say though that books of this age (it’s more than forty years old) are a bit of a gamble, and this is not just Joan Smith, it’s true of the entire genre in that era. Sometimes, even when they’re stars of their time, they feel slightly out of kilter to my modern ears. But interesting reads, nonetheless.