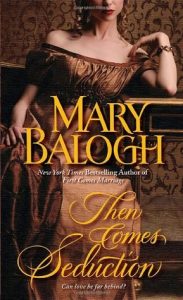 This may be a first – a Mary Balogh I didn’t enjoy. It is, of course, as well-written as all her work, but it lost me on the heroine’s character, the implausibility of the setup and the sheer torrent of angst that came close to making me lose the will to live. And the layer upon layer of subterfuge – why on earth can they not simply be straight with each other?

Here’s the premise: Jasper, Lord Montford, stakes his reputation as a seducer on virtuous country girl Katherine Huxtable. His challenge is to take her virtue within a fortnight, and by ‘take her virtue’, he means exactly what you’d expect. No fudging it with a mere kiss. And on the fourth day, he contrives a meeting with her at romantic Vauxhall, whisks her off into the undergrowth and… she puts up no resistance at all. Not in the slightest. He gazes at her through drooping lids and she melts into a puddle of panting lust. For a man she barely knows and against whom she’s been warned in the strongest possible terms. So she’s stupid, right?

This is the irreconcilable contradiction I have with the heroine. Because she’s not supposed to be stupid at all. Balogh paints her as a girl who’s actually quite thoughtful and considerate of the effects of her actions, not just on her own prospects, but on her family’s, too. So she *says* sensible things but she *does* stupid things. She sparks back at the hero sometimes when he’s trying to be a smartass. She can hold her own verbally. She just can’t control herself whenever the hero… well, does anything, really. He has only to get within twenty feet of her and she’s practically falling at his feet.

The hero’s contradictions can be explained more easily. He pretends to the world that he’s an unredeemable rake, and he is so convincing and has been portraying himself thus for so long that he actually believes it himself. So when he feels guilt or even – oh, the horror! – love, he doesn’t recognise it for what it is. And, believe it or not, he maintains this self-deception almost to the very end of the book.

The plot… well, there really isn’t one. There’s a three year time lapse, hero and heroine meet up again, they fall into each other’s arms instantly, but since they clearly can’t admit what’s blindingly obvious to everyone else (including the reader), namely that they’re full on in love with each other, because if they did the book would be a short story, they set themselves another wager. And when that goes pear-shaped, they’re bundled off to the altar double-quick time. And they STILL can’t admit the truth to each other.

And so it goes. Frankly, the whole game-playing got old really fast, as far as I was concerned. The characters weren’t believable, the banter wasn’t particularly witty or clever or even interesting, most of the time, and I just wanted to slap the pair of them upside the head and tell them to sort themselves out, pronto. I’m not a fan of characters who hide their true feelings behind layers of deception, and when they both do it, it’s just too much. It makes for a much better contrast where one character is deceptive, but the other is open and straightforward, as in the first book of this series. At least then there’s some actual conflict and the possibility of real change, instead of this artificial state of perpetual angst. And although the final third of the book was a lot better, with our hero and heroine at last talking to each other and opening up a bit, twice – twice! – the author has the hero say the wrong thing, thus plunging them back into industrial-strength angsting again. I do NOT appreciate being manipulated like that.

As for the side characters… oh Lord, what a bunch of goody two-shoes, most of them, with a couple of cartoon villains to drive the plot into places that it really doesn’t want to go. Although I liked the lazy guardian (Seth?), who was the only one with a bit of entertaining quirkiness.

So much as it goes against the grain, because normally I love Mary Balogh to pieces, I’m giving this three stars. At least I finished it, and it was touch and go at times. And I have the rest of this series already bought, so I hope things improve.

4 responses to “Review: Then Comes Seduction by Mary Balogh”