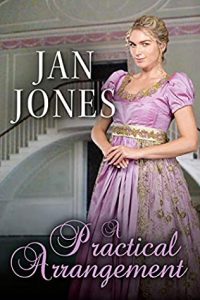 The dramatic finale to the series and we finally uncover the mysterious Flint! I’ve loved the whole series (or two series, since there’s an overarching 8-book Newmarket series, of which this is the last of the Furze House Irregulars series, which comprises books 5-8; got that? No? Just start with The Kydd Inheritance, OK?). This book runs largely concurrently with the previous book, so although it isn’t essential, for full enjoyment it’s better to have read that first.

When Benedict Fitzgilbert’s sister Lilith goes off to have adventures at Newmarket, it leaves him exposed to the worst of London’s matchmaking mamas, and he hasn’t time for all that nonsense. He’s too engrossed in tracking down the notorious Flint, whose criminal empire has long and vicious tentacles. Lilith proposes a solution: a pretend attachment with her friend Julia Congreve. This is a time-honoured Regency plot, but it never grows stale, especially when carried off as well as this.

Now, our two protagonists are seriously mismatched. Benedict is a serious and very focused man, and Julia is a social butterfly, and this is one of those glorious moments when the author properly shows us Julia in her milieu, rather than simply telling us about it and throwing in a couple of balls. Julia really does move through society like a warm knife through butter, putting people at ease, arranging dance partners, making timely introductions and all of it seemingly effortless and perfectly natural. I loved that she is simply aware of everyone in a room, even a ballroom, knowing exactly who is dancing with whom, who is sneaking off to the card room and who is quietly talking to someone behind a pillar. It’s wonderful, and even though we’re later given a reason that partly explains this, it’s still an astonishing talent and I loved it.

The plot? Well, anyone who’s worked their way through the whole series (or two series, depending on how you count) knows pretty much how it’s going to go. And yes, we finally get to find out who Flint is, and how he’s been carrying out his nefarious activities. His identity wasn’t a big surprise, mainly because there were few alternatives by that point, and the dramatic final confrontation was less nerve-wracking than usual because… well, despite the threat of violence, it was obvious it wasn’t going to happen and there would be a last-minute rescue.

As the final book of the series, the romance might be expected to play second fiddle, but it was rather nicely done, with the complication of the fake attachment at the beginning adding a certain does-he-mean-it? complexity to proceedings. But Benedict has nice manners and Julia has been in love with him for years so it all came together rather charmingly. Cue the happy ending, and there’s a multi-character series epilogue for those who like that sort of thing.

A great ending to a terrific series with fantastic characters, lots of mystery and adventure and a perfectly evoked Regency by a brilliant wordsmith. I highly recommend it. Five stars.