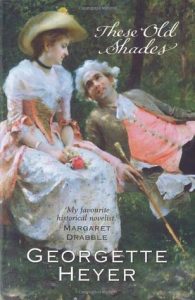 Well. What can I say? This book and these characters are greatly beloved by some Heyer aficianados, and I can somewhat see why. The hero, the Duke of Avon, is the sort of aristocratic, world-weary, domineering older man so common in Heyer, which is my least favourite kind. The heroine is another style typical of the author — young, innocent but sparky, ravishingly beautiful. Again, not my favourite. But the adventure is good, once it gets going, and there’s some of that trademark sparkling banter, and by the midpoint things were looking up. And then there was the dramatic finale. Oh dear.

Here’s the premise: the duke is out one night in Paris when he comes across an urchin running away from someone. The urchin looks oddly familiar, so the duke buys him from his pursuer and takes him home, making him his page. The page is prostrate with gratitude, and falls instantly into undying devotion for his saviour. He, of course, is completely unworthy of said devotion, having a reputation as one of the most debauched and cold-hearted characters in either Paris or London, who doesn’t have his new page’s welfare at heart at all. In fact he has a cunning and fairly horrible plan to use his new page to get his revenge on an old enemy. For the page is not a boy at all, but a girl, and the legitimate daughter of the enemy, set aside at birth to be replaced with the son of local peasants.

Now Leon/Leonie, the page who is also an aristocratic lady, is quite a sparky character, so it’s hard to dislike her, but this does throw into relief one of the problems of the book. She’s been raised as a peasant in fairly dire circumstances, and although she’s been given the basics of a good education, she’s still a peasant through and through. The peasant’s son, however, has been raised as an aristocrat, so he’s all manners and delicate good breeding, right? Well no. He’s still a peasant, who wants nothing more than to retire to the country and have a farm. Whereas Leonie has only to be put into long skirts and taught how to curtsy and wield a fan and she’s aristocratic to the core. I know this was written almost a hundred years ago, but is everything really to be set down to blood and nothing to upbringing? All nature, no nurture? It really grated on me.

As for the duke, I just don’t like that kind of hard-edged hero. If he softens the instant he meets the heroine, then maybe, but in this case he’s plotting his nefarious plots, which involve exploiting Leonie horribly, right to the end, so no. That’s a hard pass from me.

The book plot, such as it is, takes a sharp turn in both action and atmosphere about the middle to become a rollicking adventure, and once I’d got over the abrupt change, I found it good fun. It reminded me a little of The Talisman Ring with elements of Sprig Muslin thrown in for good measure. And then we get to the denouement, where the duke’s devious plans come to fruition, and I have to say it’s all pretty horrible. Maybe that was what passed for justice in 1926 but I didn’t like it at all.

And then the forty year old duke decides he will marry the nineteen year old heroine, with her puppy-dog devotion, after all. No. Just no.

On the plus side, it’s Heyer, so the writing is glorious, the banter in the adventure phase is sparkling and the settings, particularly Paris and Versailles, are magnificently evoked. I didn’t enjoy it, so that keeps it to three stars, but I realise I’m in a minority here, so don’t let my opinions put you off.

6 responses to “Review: These Old Shades by Georgette Heyer”