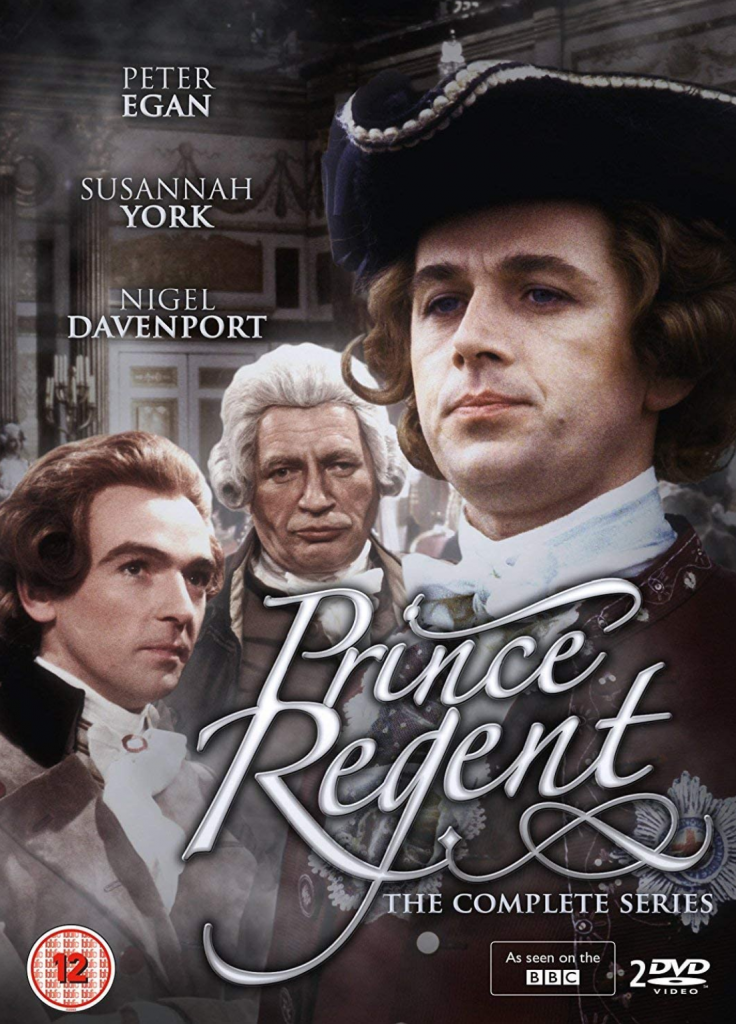 This is an oddball one. I know very little about the Prince Regent, who was born Prince George, made Prince of Wales, then Prince Regent and eventually became King George IV. He is merely a background figure in most Regency romances, or at best he may qualify for a walk-on part. This 8-episode series brings him centre stage, and covers his whole adult life, from his coming-of-age in 1783 to his coronation in 1820, with a quick round-up at the end of what happened after that. Historically, it’s quite interesting, although I have no idea how accurate it it.

The early episodes deal with his infatuation with the twice-married (and Catholic!) Maria Fitzherbert, who was older than him. She’s portrayed here as a rather virtuous person who refused to become one of George’s many mistresses and insisted that they marry first. Given that they couldn’t marry without the permission of his father, King George III, and even if they could, her Catholicism meant that he would surrender his right to the throne, it was a completely bonkers exercise. However, George drummed up a dodgy priest prepared to ‘marry’ them anyway, and they then pretended that she was his wife. Of course, the marriage was completely invalid, but it got George what he wanted.

Later episodes deal with George’s troubled marriage to Princess Caroline of Brunswick and the life and death of his daughter, Princess Charlotte. It is a mystery to me how King George III and Queen Charlotte managed to have fifteen children, yet Princess Charlotte was in her lifetime the only legitimate grandchild. You would think that some of the royal princes, at least, would have done their duty for England, but seemingly not. After Princess Charlotte’s death, there was an unseemly scramble amongst the middle-aged princes to dump mistresses, marry suitable princesses and sire an heir, a race won by Prince Edward (the fourth son) who produced Victoria.

The loose thread running through the whole series is the sporadic madness of George’s father, King George III, which eventually became so overwhelming that George was made Regent and thereby gave his name to a whole genre of historical romances. It’s a moment George has been waiting for (and even scheming for) over many years, and he’s thrilled to finally get to run the show. It’s curious that George is portrayed here as a sensitive soul, constantly distraught by some setback or other. He’s always seemed like a pretty selfish so-and-so to me, but whatever.

This is not the sort of sweeping, high-budget production we’ve come to expect. It’s more than forty years old, most scenes are shot in the studio with limited other actors on stage, and maybe this gives it a more intimate, domestic feel, but it reminded me most of Blackadder. The Crown it definitely is not. The costumes are over-the-top exuberant, and I suspect the designers took their lead from some of the exaggerated cartoons of the era rather than the more restrained fashion plates. The acting is a bit over-the-top too, although Peter Egan does a reasonable job as the Prince himself.

This is one to watch only if you have a strong interest in the historical elements, frankly. It’s not unwatchable, but it’s strange rather than gripping.