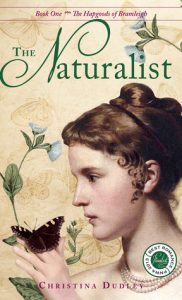 Well, this was a delightful surprise. For some reason, I’d formed the impression that this was going to be pretentious tosh, but it turned out to be a rather well-written tale in authentically Regency language, with an interesting array of characters and a plot that depends less than is common these days on contrivance and misunderstanding.

Here’s the premise: Joseph Tierney is the younger son of a baronet, whose family had hoped he would enter the church but who preferred the pursuit of science instead. Having secured the patronage of the Royal Society, he is dispatched to Somerset to begin his explorations at Pattergees, the home of Lord Marlton. He accidentally stumbles across a local lad perfect as an assistant for his work, a rough-spoken boy who miraculously knows enough Latin to name the species around them. Unfortunately, the local lad turns out to be Alice Hapgood, one of the squire’s daughters, and once the word gets about that she’s been out and about in boy’s clothes, and alone with Joseph, he feels obliged to marry her.

Now the logic of this is dubious. I’ve never been a great fan of the compromised maiden trope. Unless there’s been actual naughtiness of the baby-producing type between the couple, it’s really unreasonable to expect them to be forced into marriage. Alice is 17, young enough to have it laughed off as childish misbehaviour, she’s the squire’s daughter, after all, and this is village society, not the hallowed realms of Almack’s and Carlton House. It would be a nine-days wonder and then forgotten about, apart from some gentle teasing from time to time. However, every author sets the tone of her own created Regency, and it fits with Joseph’s serious and dutiful character. He accepts the inevitable (as he sees it) with good grace, even though it means giving up his career as a naturalist and going into the church after all.

So there’s a hasty betrothal, but plenty of room for believable misunderstanding between our non-lovers. He assumes she’s trapped him into it from pure ambition, whereas she’s been in love with him from the moment she set eyes on him, and hates the thought that the man she loves is marrying her from duty and will inevitably resent her and rue his lost career. There’s a memorable moment when he’s protesting that he’s going to marry her whether she likes it or not, she’s trying to shut him up and somehow it turns into a kiss, which they are both surprisingly enthusiastic about. But this misunderstanding leads to a glorious later scene where both of them are being entirely honest and open and straightforward with each other, and yet still manage to be entirely at cross purposes. Quite brilliantly written.

Also brilliant is the way Joseph gradually and by very small increments comes to see that this marriage is actually a good thing in itself, and marriage to Alice is the perfect outcome for him. I wasn’t mad about the oh-so-convenient-for-the-plot meeting with his scientific mentors, but the time he spends with his father and brother, talking about Alice and seeing his parsonage, bring him to the perfect place for the charming, if a tad overblown resolution to the romance.

This is a beautifully written old school Regency, a real treat for those who love the authentic language of the era, and a nice evocation of the historical setting, with two sensible and likable leads. I only spotted a very few Americanisms (fall [*] instead of autumn) and one absolute howler (possums [*] in England? I don’t think so!), but nothing that affected my enjoyment of the book. A very elegant read, with more books in the series about the eccentric Hapgood family. Five stars.

[*] UPDATE: a reader tells me that these issues have been fixed.