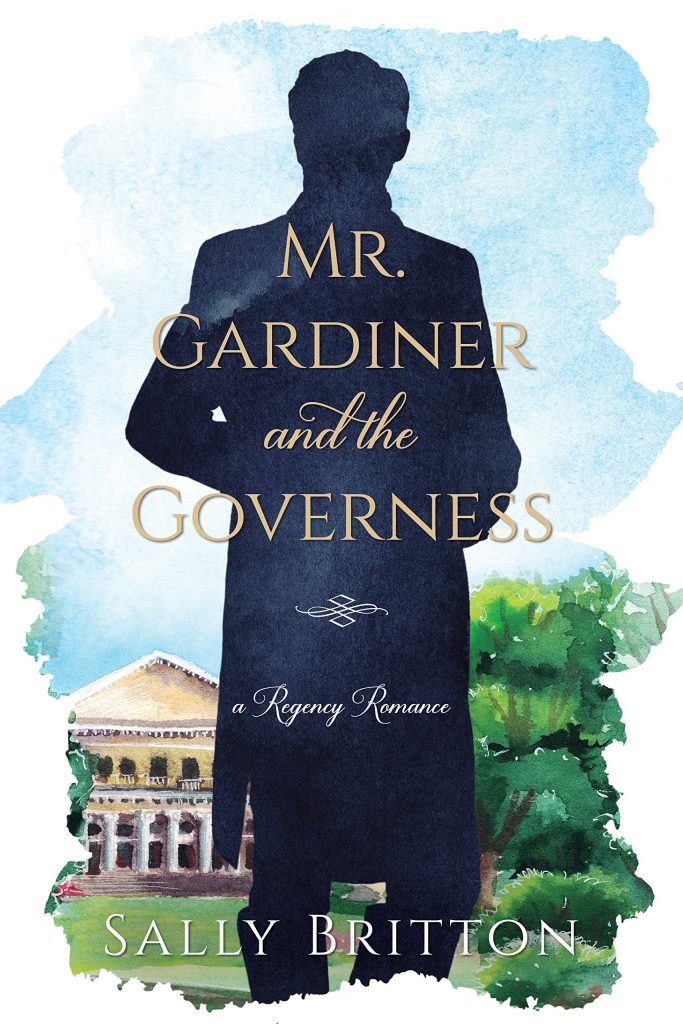 Sally Britton is one of the most talented of the new style of Regency authors emerging from the US who write sex-free stories with a strong historical foundation, and bring a welcome freshness to the genre. Britton’s been honing her craft for a few years now — this is book number twenty or so and it’s well-nigh perfect. Sympathetic characters, a wonderfully evoked setting and a swoon-worthy romance – what’s not to like?

Here’s the premise: Alice Sharpe has been passed from one household to another as the poor relation, but now she’s outstayed her welcome and is forced to take up employment as governess in a duke’s household. She’s desperate to make a go of it, but she gets off on the wrong foot immediately with a man she meets in the gardens, and assumes is just one of the duke’s gardeners. But Rupert Gardiner is an entomologist, a man fascinated by insects, and he’s engaged on a project dear to the heart of the duke – to make an illustrated record of the flora of the ducal grounds. While he’s doing that, he can also study his precious beetles. But the new governess is a distraction, and he’s not sure what to make of her.

The plot… well, there isn’t really a plot. Rupert and Alice tiptoe around each other, trying to reach a working arrangement and get to know each other better without neglecting the duties they’re paid to do, or attracting the ire of their employers. And gradually, oh so slowly, they find themselves drawn together and teetering on the edge of falling in love. They share some lovely moments together, and their first kisses are delicious. There are very few bumps in the road, they are too sensible for there to be any misunderstandings and the duke’s household is composed of universally nice, kind people, so there’s not much to go wrong, really, apart from a few minor hiccups. A special nod to Rupert’s valet, who has a very minor role, but manages to steal pretty much every scene he’s in. The children are great fun, too.

If this sounds dull, it really isn’t because there’s a magical ingredient that lifts the story far above the ordinary, and that is the garden itself. The flowers and trees, the lawns and pools, the statues (I’d love to see the statue garden) and of course all Rupert’s little beasties are evocatively described. I loved it. I also liked the idea of the duke’s house, Clairvoir Castle, which was only built ten years earlier, but was designed to look ancient – a neat conceit. And I squeaked in delight to discover that the castle’s name is pronounced CLEE-VER – that is just so British, like Beauchamp and Cholmondeley and Worcestershire and a thousand and one other names that are pronounced oddly. Kudos to the author for that little touch.

Another aspect I liked is the duke himself. The Regency romance genre is stuffed with dukes who swan idly about, and are invariably young, rakish, manly and very, very hot. This duke is involved in government business, politics and diplomacy, just as he should be, and the ducal family members are gracious and regal. There’s a very strong air that they’re way, way above Alice and Rupert on the social ladder, as you’d expect. This is beautifully done. I loved the scene where Alice is being interviewed by the two duchesses, with the distinction of rank and the opulence and elegance of the room brilliantly evoked.

This is a quiet, low-action story, and if you’re looking for elopements or highwaymen, duels at dawn or a kidnapping, you should probably pass on this one. But if you want a beautifully written and gentle story with a lovely romance and an exquisitely drawn setting, I highly recommend it. Five stars.