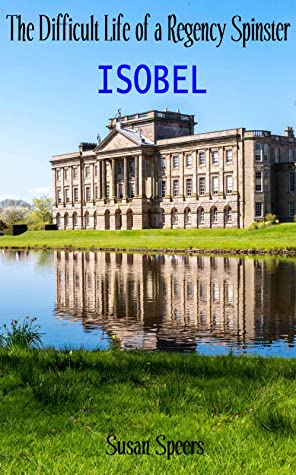 Susan Speers is one of my favourite authors, not because she’s the World’s Best Writer (she has her faults, like most writers do), but because she always takes me by surprise. I just never know from one book to the next what I’m going to find. More than that, even within the book itself, I never know where it’s going. With most Regencies, once the characters are on stage and the circumstances are laid out, it’s generally easy to predict what will happen. Not the details, but the general flow. Not with a Speers book, and there’s an edginess to that that’s almost entirely lacking elsewhere in the genre. Mary Balogh had it in some of her early works, but it’s rare. One reviewer described this book as thrilling, and I can see why. I find it unsettling, but it’s still fascinating, as all Speers’ books are. I’ve varied in how much I’ve enjoyed each one, but I would never dream of missing one, and now that Amazon has stopped telling followers about new releases, she’s the only author where I regularly check to see if there’s a new one out.

Here’s the premise: Isobel is an orphan living with her stepmother and two stepsisters. Her guardian is away in India and has been happy to let Isobel’s stepmother run the estate and look after Isobel, but in the nature of stepmothers, this one is bent on squeezing out Isobel in favour of her own daughters, and taking possession of Isobel’s mother’s collection of jewellery, intended for Isobel. Unable to stop her, Isobel resorts to stealing her own jewellery, and when that is discovered, borrowing and replacing it, just to appease her own sense of injustice.

Into this difficult setting comes the mysterious Earl of Drayton to buy a silver presentation box, part of Isobel’s fortune, being sold over her head. He has his own objectives, but his path runs alongside Isobel’s for a while, so when she runs away from home to avoid an unwanted marriage or the threat of an asylum, he scoops her up to protect her.

Or so he says. I have to say that the earl came across as rather a dark character to me. He very creepily turns up wherever Isobel happens to be. Is he watching her? I was suspicious of him almost to the end, and when he started kissing Isobel in the moonlight, I feared the worst for her. He dumps her on a friend of his, and I was suspicious of her, too! What are these two up to? The friendly Eudora with her mysteriously missing companion and her willingness to take in a random stranger just because Drayton asks her to had me silently screaming: run away, Isobel! Quick, quick!

After this brief interlude of cosseting in London, the book veers off into road movie territory, with a series of stops with various people where Isobel has to pretend to be Eudora’s companion (replacing the mysteriously missing one), Eudora takes malicious delight in bossing her about and the earl continues to leap out of dark corners and indulge in moonlight kisses. It’s this latter habit that inevitably gets them into trouble and leads to a fake engagement. Or is it fake? Hard to tell what the earl is feeling or thinking, frankly, and Isobel, to whose thoughts we are privy, is such a jumble of contradictions that there’s no making her out, either. Eudora was not much easier to understand.

Along the way, there are a number of adventures that don’t seem to be much connected but are quite entertaining anyway, a rather clever denouement that I enjoyed and a satisfactory resolution to the romance. These two were not the most passionate of couples (apart from when struck by moonlight!) but they felt like a good fit, to me. The sex is mentioned but it’s not graphic in the slightest. As far as historical accuracy goes, nothing jumped out at me, although I was thrown by the earl’s estate being called Blackpool (which is a very famous town in Lancashire), but I don’t think it was meant to be anywhere near the town. Another house mentioned was called Blessings, an oddly unBritish name. With all the travelling around, I never had any idea where they were, most of the time. I’d have liked some idea of locations just to get my bearings (it’s very dislocating, as a Brit, not to know where the characters are and which way they’re travelling). As usual with Speers, a final edit wouldn’t have gone amiss. There were a number of typos, and the punctuation was terrible.

This is not my favourite Speers, but I still enjoyed it a lot and galloped through it in a couple of days. It unsettled me not to know whether any of the main characters were heroes or villains or some combination until the very end. Combined with the jumping about from place to place, that keeps it to four stars for me, but it was still a very worthwhile and interesting read. Now on to J… Jane? Juliana? Jennifer?