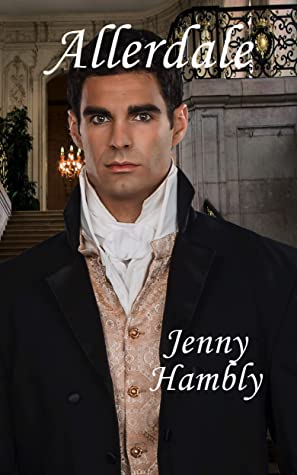 Every Jenny Hambly book is a lovely read in the traditional style, very much modelled on Georgette Heyer. This is a more conventional outing than the previous series, which transported the reader to the less well-trodden venues of Buttermere and Cheltenham, for here we are in London for the season, complete with outings to the theatre, Richmond Park and the drawing rooms and ballrooms of Mayfair. Very much one for the traditionalists.

Here’s the premise: Eleanor Edgcott is the orphaned daughter of a diplomat. He’s left her very well off, so even though she’s living with a cousin, she’d really like to set up her own establishment and be independent. If that’s not possible, she’ll find some other project to absorb her energies, and there’s always her cousin and his wife to sort out, and a beautiful young girl to rescue from the clutches of a determined rake. The last thing she needs is a husband to cramp her style and curb her independent spirit.

Miles, the Earl of Allerdale, is attempting to polish up his reputation after his wild and impulsive ways led him to near disaster. He’s been learning to manage his estates in the north, and finding it unexpectedly fulfilling, but now he’s back in town and he’s rashly promised his mother he’ll find himself a wife. He’s not very keen, and anyway, no one catches his eye. The respectable ones are dull as ditchwater, and the interesting ones are too headstrong to make good wife material.

Anyone who read Georgianna will remember Lord Allerdale as the villain of that book. Rather a charming and attractive one, as it happens, so the task of transforming him into a hero isn’t terribly challenging. It’s not necessary to have read that book, since the events therein are explained in some detail, but a lot of the characters from that whole series pop up here, which may be confusing for anyone who sees that this is book 1 of a series and expects it to be a fresh start. I get that they would all be in town for the season and they all know each other, but still, I felt that there were rather too many of them, frankly. I’m hopeless at remembering the details of previous books, so I just let it all wash over me, but it was confusing.

Eleanor is a lovely heroine, and anyone who’s read Georgette Heyer’s Grand Sophy will recognise her at once. She’s not quite as interfering as Sophy, and I liked her the better for that, but she’s a splendidly spirited and independent lady, quick-witted and (mostly) sensible. Her interactions with Miles are sparky and fun from the start.

But that raises an interesting point. Although we know almost from page 1 that these two are destined to end up together, and assorted friends and relations are pushing them towards each other, they don’t actually meet until almost a third of the way through the book. It makes the romance seem rather rushed, especially as there’s a very abrupt transition from getting-to-know-you outings to the proposal. I actually enjoyed the proposal scene very much – Eleanor was at her most creative – but it did seem to explode out of nowhere.

I must mention one of the sub-plots, which is another one fans of Georgette Heyer will recognise, this time from Cotillion. A beautiful orphan is being browbeaten by her vulgar aunt into becoming the mistress of a notable rake. Meanwhile, an impoverished Russian gent has fallen wildly in love with her, and it falls to Eleanor to rescue the orphan and pair her up with the Russian gent.

The name of Georgette Heyer crops up a lot in the context of Jenny Hambly’s books. Partly that’s because Hambly’s writing is every bit as deft as Heyer’s, and aficianados will love the familiar expressions and phraseology. As far as plots go, it’s not that Hambly is unoriginal, it’s more that Heyer covered pretty much the full range of plots in certain settings, like Bath and the London season, so anyone treading the same ground is inevitably going to evoke echoes of Heyer. And honestly, that’s no bad thing. I enjoyed playing spot-the-similarity.

If you’ve read Hambly before, this is another accomplished and highly enjoyable read. It was four stars for me because the romance jumped a little too fast to the question of marriage – I like a slower build-up, but that’s purely a personal preference. And if you’re new to the author, I recommend you start at the beginning, with Rosalind.