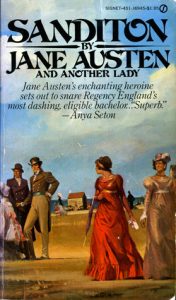 Well, that was fun! I’ve been hoping to read this book for ages, since it’s touted as the definitive version of Sanditon, Jane Austen’s unfinished work, but I was waiting patiently for it to come out in ebook form. But a clear-out of the loft produced a box full of old Georgette Heyer paperbacks, and amongst them this Signet book from 1975, the pages yellowed and brittle with age. I haven’t read a dead tree book in years, but this was one I couldn’t resist.

There was another reason for reading it, too, since I’m working through a rerun of the 2019 TV version, and it was an interesting comparison. Or rather, there is absolutely NO comparison. One is light-hearted, witty, elegant and charming. The other is… well, I’m tempted to say pointless. But enough of the TV version. This review is about the book.

Here’s the premise: Charlotte Heywood is taken up by Mr Tom Parker and his wife after the Parkers’ carriage suffers an accident outside the Heywood house. She is to stay with them at the small seaside town of Sanditon, which Mr Parker is busily trying to turn into a fashionable resort like Brighton, complete with sea bathing (from bathing machines!) and splendid views and lots and lots of bracing fresh air. Lady Denham is the other prime mover in this venture, and the first few chapters introduce an array of other characters: Mr Parker’s brother and sisters, hypochondriacs all; Sir Edward and Miss Denham, the impoverished aristocrats; Clara Brereton, the poor relation; wealthy mulatto Miss Lambe and her entourage; and finally, briefly glimpsed, the presumed hero of the book, Sydney Parker, yet another brother. That was as far as Jane Austen got, so everything else comes from the imagination of Another Lady.

Most of these characters are reasonably well defined from the start, but one is a complete enigma – Sydney Parker. Jane Austen tells us virtually nothing about him, so he’s a blank slate. Another Lady does a terrific job of making him a likable and very heroic hero, while also making him darkly enigmatic at times. He’s one of the most original characters I’ve come across, and I totally understand why Charlotte finds him so compelling. I find him compelling, too! This is one of those rare cases where all the other characters agree that Sydney is a charismatic, charming and intelligent man, and he actually behaves that way. I get so tired of Regency authors telling us that a character is clever when they continue to do blindingly stupid things, so it’s very pleasant to be able to say that Sydney really is clever. His cleverness trips him up sometimes, but he’s clever enough to get himself out of the mess.

The blurb describes Charlotte as ‘Jane Austen’s most captivating heroine’. That’s a bit misleading, because we don’t really know much about Jane Austen’s Charlotte at all, so this is really Another Lady’s Charlotte, and yes, she is rather captivating, a very practical girl who makes an interesting counterpoint to the flighty and up-in-the-boughs Parkers, with their constant schemes. She is also a very well brought up young lady, who gently reproves Sydney whenever he seems to wander into misguided territory. In fact, to begin with, she seems to disapprove of him rather thoroughly, as a frivolous chap with a mischievous or even a bad streak. But of course she comes round nicely.

The plot, such as it is, meanders about rather charmingly, with a visit to neighbouring resort Brinshore and some whimsical efforts to collect seaweed. Towards the end, it veers into melodramatic territory, seeming like one of the more extreme Georgette Heyers before resolving itself neatly and without fuss. A lovely read, and although it has too much focus on the romance to ever pretend to be an authentic Jane Austen, and the language never rises to her sublime heights (in particular, Another Lady never comes close to capturing Sir Edward’s pompous and long-winded verbiage), I enjoyed it enormously. Five stars. Thoroughly recommended.