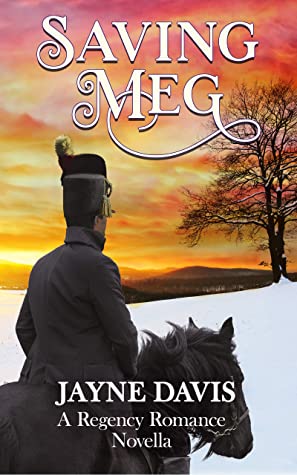 Short but very sweet – a lovely little novella about a soldier returning from the Napoleonic wars to claim the woman he’s loved for years, battling through snow to her side, only to find that she’s on the brink of marrying her cousin. Needless to say, there’s a lot more to it, as Meg is being forced into marriage by threats against her mother. Jon arrives just in time, but what can he do to help? He can save Meg by marrying her himself, that’s what.

So begins a heroic ride through the snow to obtain a marriage licence in time to prevent the marriage, or at least to prevent the repercussions if Meg refuses point blank to go through with it at the altar. I won’t spoil the story by revealing how the villain’s dastardly plot is foiled, but suffice to say that my pedantic soul was thrilled by the clever use of the provisions of the Marriage Act, and by an ingenious intervention from the vicar.

So three rousing cheers for impeccable deployment of Regency law and plot logic, the romance was heart-warming, and there’s a delightfully original epilogue. My only complaint is that it’s too short! I could have stood to read a lot more about these characters. Five stars.