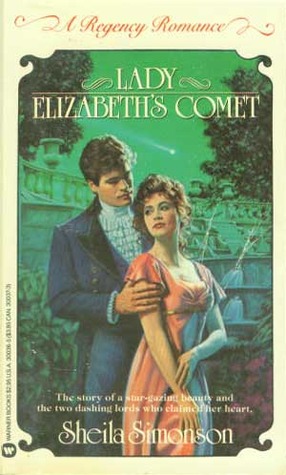 There are books I enjoy, books I REALLY enjoy, and books where everything else grinds to a halt so that I can read on, breathless, until the end is reached. This book is definitely in the third category. I cannot recall a book where the characters are so deep, so subtly nuanced, so downright intriguing before. A fascinating read.

Here’s the premise: Lady Elizabeth Conway, the eldest of eight daughters of an earl, awaits with trepidation the arrival of the new Lord Clanross, a distant cousin who was never expected to inherit, was shipped off to join the army in his youth and has been employed as an estate manager since he was invalided out. Definitely not earl material. His arrival is inauspicious. He looks pale and ill, and is boring as ditch-water, when he’s not being rude. But when his war injuries flare up in life-threatening manner, Elizabeth begins to see a different side to him.

Elizabeth is a fascinating character. Her great obsession is her telescope, through which she hopes to detect a new comet. As she’s viewed as irredeemably eccentric and a blue-stocking to boot, she’s still unmarried at the age of twenty-eight, and her scientific bent makes her largely oblivious to what’s going on around her, particularly the welfare of her two younger sisters, fourteen-year-old twins Jean and Margaret, who have bested a succession of governesses and are well on the way to running wild. Lord Clanross, on the other hand, is very much interested in the sisters and presses Elizabeth to get on and organise a governess. The two spar frequently over this and… well, pretty much everything.

Into this somewhat hostile environment comes Lord Bevis, heir to an earldom, a handsome, witty and charming man who has been pursuing Elizabeth for years, followed in time by Willoughby Conway-Gore, Clanross’s current heir, a somewhat snivelling man who has run through his own fortune and is put out that Clanross has survived to cut him out of the inheritance. He brings with him his beautiful peahen of a sister, with the object of marrying her off advantageously to Clanross or Bevis – either will do. And in the background is Elizabeth’s conventional companion, the new and very unconventional governess and an assortment of relations.

The beauty of this book, however, is that it is entirely written in the first person from Elizabeth’s point of view. This means that we see absolutely everything through her eyes, infused with all her own prejudices and foibles. There are times when the twins aren’t even mentioned, for instance, because Elizabeth has basically forgotten their existence. The dull companion barely registers but the governess, with her scientific bent (she’s a botanist) registers far more. And of course we see the two important men in her life just as Elizabeth herself sees them, and watch how her opinions gradually blur and shift as she begins to view them differently.

Clanross is the interloper, an unworthy commoner with the soul of an accountant, elevated beyond his desserts by a quirk of the laws of primogeniture. He’s rude, plain and downright awkward, and makes Elizabeth bristle with righteous indignation (and outright prejudice) every time she encounters him. Bevis, on the other hand, is the golden aristocrat, the smooth talker, flirtatious, mannered and so, so charming, with the familiarity that comes from long friendship. It’s no wonder that she begins to think perhaps it’s time to say yes to him, and settle down to married life. But the difficult question of her telescope won’t go away. Bevis is horrified by the thought of her pursuing so eccentric a study after they’re married. Clanross, on the other hand, respects and admires her scientific work.

And so, inch by inch, Elizabeth comes to understand Clanross better and begins to appreciate his true worth. And all this is done with scintillating dialogue which is genuinely clever and witty, and very, very funny, as well as Elizabeth’s inner thoughts, and her guilty realisation that she really has neglected her sisters, and hasn’t done justice to Clanross himself. It’s all brilliantly done. I can’t remember when I last read a book that I enjoyed so much, and on a number of different levels. Even the minor characters are perfectly realised and fully rounded human beings, in all their quirky mixture of good and bad and outright weird. And the romance? Perfectly judged and eminently satisfying. An excellent five stars.