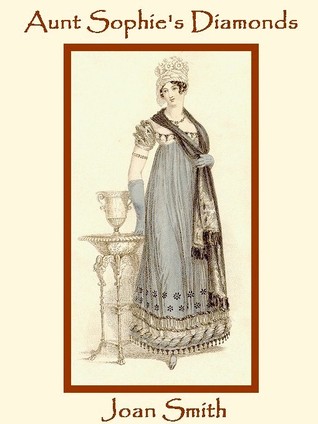 Well, this is a complete riot. It’s old-school, more of a Regency romp than a romance, although the romance side isn’t as neglected as it often is in books of this era (Georgette Heyer has a lot to answer for). This is light-hearted fun with a hero who’s sensible and only a teeny bit arrogant, and a heroine who seems demure and spiritless but absolutely isn’t, together with an array of charmingly wacky side characters.

Here’s the premise: Sophie Tewksbury is finally about to turn up her toes, and her relations gather at her deathbed to speculate about who will get the famous Beresford Diamonds and the rest of her fortune. But the will contains a surprise – the diamonds are to be buried with her, some lesser pieces are to be distributed, and the family are to gather again in a year’s time to hear the rest of her dispositions, which depend on what has happened in the interim. No one knows what that means, but in the meantime, the diamonds are buried in the graveyard, awaiting anyone brave enough to turn up with a spade and tools to break into the steel lining of the coffin.

Our heroine, Claudia, is a bit part player in this drama, for although she’s a niece of Sophie’s, she’s never met her and has no expectations. She’s surprised to inherit an emerald ring. Her cousin Luane, however, is miffed that she wasn’t given the diamond necklace, as she was promised, and determines to dig it up. She enlists Claudia to help her, and also a cousin, Gabriel, whom Luane hopes to marry one day. Another cousin, Jonathon, has inherited the ramshackle house but no money, so he’s also keen to find the diamonds. Claudia’s mother, Marcia, summons her beau, a former ironmonger, who she thinks will have the knowledge to break open the coffin. Ranged against these schemes is a more distant cousin, Sir Hillary Thoreau, a wealthy neighbour and nonesuch (a male incomparable), who watches over them all with amused detachment.

And so the stage is set for a great many graveside encounters at midnight, as one party or another tries to retrieve the diamonds, not to mention a certain amount of courting from the ever-optimistic Jonathon of either Luane or Claudia, as circumstances change. One or other of the cousins, he’s sure, will inherit the rest of the fortune, and he wants to be married to whoever it is, so he can afford to restore the house to its former glory. But it isn’t until the ironmonger beau turns up and looks set to marry Claudia’s mother that he settles on one of them. The ironmonger, now a moneylender, is fabulously rich and he’s bound to leave all that wealth to Claudia, isn’t he? There follows possibly the funniest proposal scene I’ve ever read. The book is worth the read for that alone.

Meanwhile, the urbane and unflappable Sir Hillary is also paying court to Claudia, and thank goodness for a hero who makes his intentions clear from the start, and doesn’t make an out-of-the-blue declaration in the final chapter. Claudia, of course, is oblivious to it all, and even when she does begin to have an inkling, she daren’t allow herself to believe it. She’s lived her whole life in the sort of dull situation where nothing really good ever happens to her, and here’s this dashing, rich, charming and worldly man with his wonderful houses and luxurious life – he can’t really want her, can he? And so there are some minor misunderstandings, but not such as to cause any real difficulties, and the romance ends in fine style.

There are some historical wobbles – my eyebrows rose at the mention of a welding torch (an expression not used before about 1900), but the book dates from the pre-internet era when research involved a trudge to the library, so it’s forgivable. The author seems to be entertainingly unfamiliar with chess. No, each player does not have some white pieces and some black, and I was entirely unconvinced that Claudia would be able to play such an intellectual game without paying much attention to it. You might play backgammon that way, perhaps, but chess involves a lot of deep thought from both players. On the other hand, hurrah for unmarried characters who find themselves potentially having to overnight at an inn, who sensibly ask at the parsonage for beds for the night (I wish more stranded Regency characters would do that instead of being caught out and having to marry in haste). My grumbles are very minor issues, and overall this is a fine read, well-written and with characters who are both charmingly eccentric and perfectly believable. I enjoyed every minute of it. Five stars.