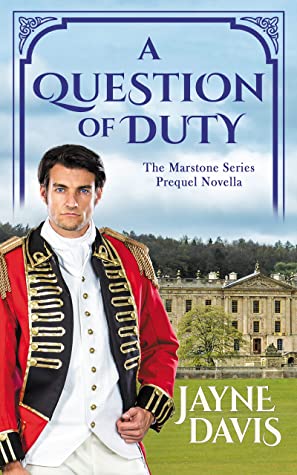 Another lovely novella from one of the most reliable of recent Regency authors, and a prequel to the fascinating Marstone family saga.

Here’s the premise: Captain Jack Stanlake is sent home from the Colonies as his father is ill, and he is asked to escort the Colonel’s wife and daughters who are also returning to England. Their purpose is to find husbands, and the girls’ mama is ambitious for them. She sees Jack, the younger son of an earl, as a potential target. He can’t afford a wife, though, and although he’s drawn to Clara, the elder daughter, he knows his father would never approve a marriage to a merchant’s niece. She’s drawn to him, too, but she’s not sure she wants to be tied down to a husband when there’s a whole world to explore.

When they arrive in London, they go their separate ways, she to the frivolity of the London season and he to his father’s deathbed and an unexpected and most unwelcome complication – an arranged marriage. Jack has to scramble to extricate himself from his brother’s machinations. The title of the book suggests that there’s a serious dilemma for Jack to solve, but it seemed to me that he made his decision rather easily. I think in reality he might have hesitated a little more. But there again, brother Charles is such a piece of work that maybe he forfeits any right to expect Jack to respect his duty to the family.

The romance ends in appropriate style, aided and abetted by various members of Clara’s family, and thank goodness for that. So many Regencies seem to be populated entirely by dysfunctional families that it makes a refreshing change to meet one that seems normal and perfectly benign. Davis’ writing is, as always, note perfect, and the crossing of the Atlantic was beautifully evoked. I could almost hear the creaking of the ship and the slap of the sails, and taste the salt in the air. Wonderful stuff. And there’s never any need to worry about historical correctness with Davis. I was pleased that when Jack writes to Clara, he does so through the medium of her uncle, as is proper.

A lovely tale, and as it’s a prequel to the whole Marstone saga, it makes me want to rush off and reread the rest of the series (which is now available in a handy boxed set, I discovered). Five stars.