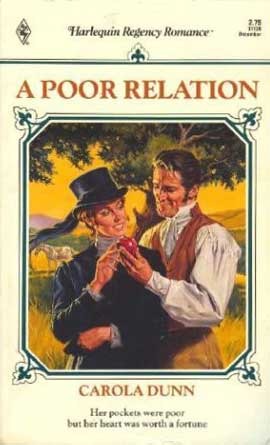 This is one of those books that shouldn’t have worked at all, because it fell into such well-worn ruts that it was a wonder it was able to scramble its way out of them, but somehow it did, and I loved it.

Here’s the premise: Rowena Caxton receives some bad news from her lawyer – the estate her father left her, and which she has been quite happily managing to keep in good order, has been subsumed by debts, and must be sold. Rowena is penniless, and must throw herself on the mercy of her aunt and uncle. Her uncle is easy-going but distant, and her aunt is happy to take her on as companion and chaperon to the spoilt, wilful and beautiful Millicent, around whom the household revolves. Millicent delights in putting Rowena down at every opportunity, but Rowena makes a friend of Anne, the plain younger sister. Meanwhile, Major Christopher Scott, who has been escorting his injured friend, Captain Bernard Cartwright, back from the wars, is astonished to find that he has inherited an earldom, complete with run-down estate and no wherewithal to improve it. And right next door lives the incomparable Millie, with a sizable fortune…

Now, the cliches here just jump off the page. The poor relation heroine… check. The unexpected nobleman… check. The impoverished estate with the need to marry an heiress… check. The selfish and petulant ingenue… check. The charming (but interestingly injured) sidekick… check. The uncaring relations… check. And naturally the first few times the hero and heroine meet, it’s under difficult circumstances, when he treats her like a servant (because she looks like one) and she thinks he’s too rude for words (because he is). And naturally they are thrown together at every turn and slowly learn to appreciate each other.

So yes, the plot runs on well-worn rails, but the trick is in the execution, and it’s here that Dunn’s talent shines. Both hero and heroine (and the minor pairing) are lively characters, very likable. Rowena is a teeny bit subversive without veering into outright rebellion. The major is rather charming beneath the briskly military exterior. They bond over apples, which is seriously original (she tells him how to manage his orchards, which are his main crop). The minor characters, even those who are merely there as foils for the principals, are quirky rather than over-the-top pantomime characters. And needless to say, the writing is superb.

The romance develops nicely, and isn’t forgotten about until the last page, although I could have done without the final foolish obstacle and the (frankly silly) resolution of it, but I still enjoyed this enormously. Five stars.