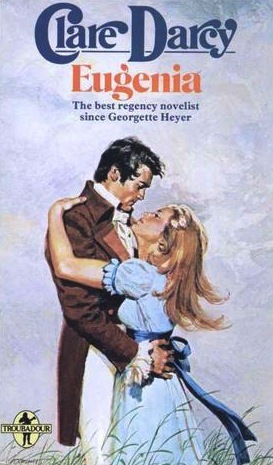 I’ve been hearing for so long that Clare Darcy was one of the best of the old-school Regency authors, but finally a bunch of her books are out on Kindle, and I can say it myself – yep, she’s definitely one of the best. This is very much in the Georgette Heyer style of a romp, the pages filled with wildly eccentric (but very funny) characters, an over-the-top (but very funny) plot and a great deal of stylish (but very funny) writing. Did I like it? I loved it!

Here’s the premise: Miss Eugenia Liddiard is leaving Miss Bascom’s Select Academy for Young Ladies in Bath to return to her guardian’s estate. The Earl of Chandross inherited her three years earlier when her father died, whereupon she became just another indigent relation dependent on his lordship, and living at Mere. But now Eugenia is old enough to be fired off into society, to marry and no longer be a charge on her guardian. She has a much more comfortable plan of her own, however. She will marry the neighbour from her old home in Kent, Tom Rowntree, since he’s a childhood playmate, they get on like a house on fire and he’s the brother of her best friend. But on the journey from Bath, she has an unexpected encounter with a previously unsuspected cousin, Richard Liddiard, who’s too ill to resist being scooped up in one of Eugenia’s daring schemes – he’s the spitting image of another cousin, Gerry, so she’ll take him to Mere to recuperate, where he’ll pretend to be Gerry. Which plan goes along swimmingly until Bow Street Runners arrive, looking for Gerry to arrest him for killing a man in a highway robbery gone wrong.

Eugenia is delightfully creative, however, so she devises one plan after another to keep Richard safe from the law, and Gerry, too, when he turns up, not hesitating to involve her friend (Tom’s sister, Muffet), her old nurse and coachman, Tom and his family, and the glorious Lady Brassborough, an actress and all-round strumpet gone more or less respectable, having married one of her many admirers. Here’s a glimpse of her style: ‘Upstairs in her bedchamber Lady Brassborough, […]was being assisted by Hortense, her ancient dresser, into a toilette that was warranted to astound all beholders, consisting of a crimson brocade gown, a turban of crimson satin shot with gold and embellished with a plume of curled ostrich feathers, a tinsel shawl, spangled Spanish slippers, and the Pontowski emeralds, which mounted her majestic bosom in heavy splendour to fall in an unbelievable cascade to her non-existent waist.’

The finale to these shenanigans is so wonderful, I’m not going to spoil it by revealing any of the details. Suffice it to say that Heyer herself could not have concocted anything more perfect. Or perfectly absurd, perhaps. Now, a great many reviews lament that Clare Darcy is not Georgette Heyer, despite some similarities, which is obviously true. Like Jane Austen, Heyer is incomparable and anyone who reads this book expecting to find a faithful imitation of Heyer will be disappointed. But Darcy has her own magnificent style, and although she was clearly influenced by Heyer (as many authors were), she very much puts her own stamp on her own creation.

The romance suffers, as many of the era do, from subservience to the needs of the over-active plot, and from the lack of the hero’s perspective. Nevertheless, the hero is not the overbearing, domineering sort (and all the better for it), and their final denouement is managed with determination, if not a great deal of finesse on his side. But thank heavens for a couple who know their own minds and don’t have to be cajoled into a betrothal, or, which is worse, have their own feelings pointed out to them.

I really enjoyed this, and will be looking out for more by Clare Darcy. Highly recommended for traditionalists. Five stars.