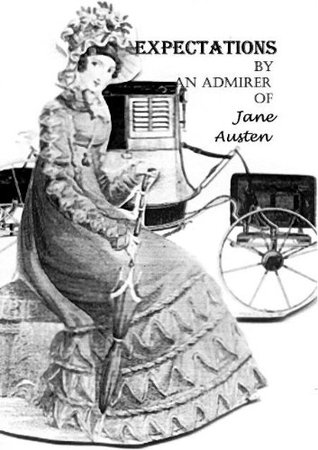 A strange little book, which picks up a couple of years after Pride and Prejudice finished, and ties up all the loose ends with elaborately double-tied bows. It’s beautifully written, badly punctuated and varies in tone from sublime to merely dull, but it has two incomparable assets: the humour is glorious and it makes a hero of Mr Bennet. These may not be unconnnected.

Here’s the premise: Phoebe Parker is the spinster eldest daughter of a niece of Lady Catherine de Burgh, who married a naval officer against the wishes of her family and was subsequently cut off. When her husband dies, she struggles to manage, but eventually, her other two daughters are safely married, and a neighbour and friend has found positions in the navy for the twin boys. But the outfitting of two young men at once is beyond Mrs Parker’s means, so as a last resort, she writes to Lady Catherine for help. Lady C comes up trumps, and provides all their clothing and equipment, plus a small allowance, but she wants something in return: she asks for Phoebe to become her companion for a year, since her daughter, the sickly Anne, has died. Phoebe, a practical and intelligent soul, is happy to oblige because she feels she will derive endless amusement from the forthright Lady C. But of course, Mrs Jenkinson, the former governess and companion to Anne de Burgh, is not at all pleased by this usurpation of her role.

The Rosings parts of the book are not terribly exciting, with some rather dull business about setting up a school. However, there are fun interactions amongst the characters. Phoebe makes a friend of Charlotte Lucas, Mrs Jenkinson plots, Colonel Fitzwilliam falls in love and Mr Collins is a buffoon, as always. Lady Catherine is very much herself, but it’s a more nuanced and interesting Lady Catherine than the caricature in the book.

But then things take a more serious turn. There’s an outbreak of scarlet fever around Rosings, which carries off poor Charlotte Collins, whose epitaph must surely read: ‘she had a miserable life, and then she died’. It seems unfair, when authors have absolute power of life and death over their characters, to kill off one who deserved better and leave the idiotic Mr Collins alive and well (there were plot reasons for it, but not very plausible ones, even though it led to one of his silliest ever conversations).

The other significant death is that of Mrs Bennet, one whom I’ll not mourn quite so deeply. Or at all, in fact, much like Mr Bennet himself, who sees himself released from the cage of matrimony and swears he’ll never marry again. Well, we know how that’s going to end, don’t we? He sets off to visit Pemberley and various old friends, which he’s never felt able to do before, not wanting to inflict his silly wife on too many people. And along the way, he meets up with Phoebe, who shares his sense of humour.

I haven’t read too many P&P variations, but from reading a lot of blurbs, it seems to me that a great many of them start with the death of Mr Bennet, Mr Collins inheriting Longbourn and the Bennet ladies out on their ear. I must say, I totally enjoyed the idea of Mr Bennet the happy widower, pottering about the country from daughter to friend to other daughter, and generally living the life of Riley. His freedom dissipated much of his bitterness and just made him very funny. Every scene he was in simply fizzed with energy and his sardonic wit, and several times he got the better of Lady C simply by being way, way cleverer than she is. He was utterly awesome, and I’d have married him in two seconds flat. Lovely man, and it was wonderful to see him as a hero.

Phoebe… well, she came across as something of a shadow of Mr Bennet. She was clever, too, and witty and sensible, and she deserved her hero, but she was just a shade colourless by comparison. For those who want to see old favourites, there’s a fair bit of Darcy and Elizabeth, a little of Jane, Bingley, Kitty and Mary, although I have to confess I totally enjoyed Mary’s development (she decided what she wanted and took charge of making it happen with admirable determination), and the delightful Mr Lacey. By the end of the book, almost everyone is married (even Mr Collins finds a second wife) and producing babies left, right and centre (I liked the word-play in the title, encompassing both Mr Collins’ expectations, and the baby-producing sort).

I have a few minor quibbles. The Bingleys have apparently settled in Derbyshire, but surely the book places them in the next county to the Darcys? And there’s something funky with the ages. Phoebe’s twin brothers Peter and Horatio are to become midshipmen at 19, when 12ish is usual, Mary is seemingly still only 17, and Mr Collins is only 24! A clergyman couldn’t be ordained before the age of 24, and this book is set several years after his ordination. It was also odd that he made so much of Phoebe being older than him, when Charlotte had been even older.

But none of this interfered with the sheer joy of seeing Mr Bennet let loose to scatter his wit in all directions, so despite the dull patches and the commas scattered as randomly as salt from a shaker, I loved this enough to give it five stars.