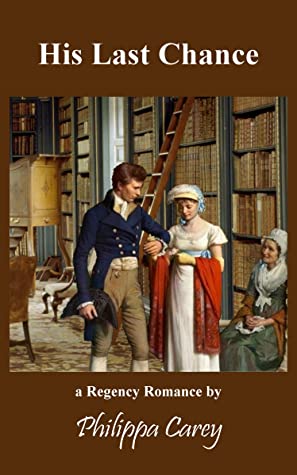 This is such an odd little book. It’s written in a simplistic style reminiscent of a beginner author (although in fact she’s published a number of books), nothing very much happens and there’s no great mystery to be unravelled or obstacles to overcome. And yet it has a charm all its own. If you’re looking for a straightforward gentle romance, with nothing too taxing in it, this may be the read for you.

Here’s the premise: Lord Peter Wilson is the third son of a marquess who’s been left at a loose end for too long. With neither the expectations of the heir nor a career to occupy him, he’s filled his time by rampaging about in London with his equally wild friends. But his father’s had enough. One more quarterly allowance, and that’s it. Peter can support himself in future, either by finding an heiress to marry, by taking up a career or by rescuing the neglected Devonshire estate. If he can make it profitable by the end of the next quarter, his father will make it over to him. That seems like a better option to Peter, and really, how hard can it be to sort out the tenant farmers and get things running smoothly again?

Well, quite hard, as it turns out, since the steward has been robbing the estate blind, and ran off, probably to take ship for America, as soon as Peter arrived. The servants have been underpaid, the tenants have all been overcharged, and the whole place is in a state of dilapidation. Oh yes, and there’s a smuggling operation that uses the cellars to store contraband. So Peter turns to the baron next door for help, to discover that Lord Harford has a charming elder daughter, Anne, who happens to be blind. The baron, his lady wife and the younger daughter are about to set off for the London season, but the blind daughter is staying behind, with crusty Great-aunt Hermione as chaperon…

There was never any doubt about where this was going, and the author takes us there by the most direct route possible. There are no difficulties, no great misunderstandings and no angst here, just a slowly developing liking that turns into admiration and then love, on both sides. And Anne’s blindness isn’t an obstacle in the slightest. In fact, I very much liked that Peter’s early interest in Anne is derived from her blindness. The younger daughter simpers and flirts with him, something he’s seen so much in London and is thoroughly bored by, but Anne is unaffectedly open with him, because she doesn’t see him as a handsome and eligible young man, just as a friendly neighbour. Not being cued by the facial expressions of those around her, she isn’t even aware that she ought to restrain her pleasure when he takes notice of her. He finds her refreshingly natural and she’s thrilled to have a male friend who treats her in a gentlemanly fashion.

And that brings me to one of my standard grumbles with books about reformed ne’er-do-wells. Peter is supposed to be so wild that his own father was prepared to cast him off, yet in Devonshire he behaves impeccably at all times. He’s considerate towards Anne, respectful towards Great-aunt Hermione, understanding towards his servants and tenants, censorious towards the smugglers and courteous to everyone. Except one of the villains, who gets a gratuitous kick or two after he’s been taken down. Naughty Peter. And of course he’s smart enough to sort out the estate’s problems, or at least to get help from people better qualified than he is.

It’s hard not to like both Peter and Anne. There isn’t a lot of depth to them, or any of the characters, really, and everyone is either a jolly good sort or a black-hearted villain. The plot isn’t complicated, either, and everything Peter planned went more or less smoothly. I really would have liked some unexpected twists along the way. In particular, I rather hoped that in the end the estate would turn out not to be profitable after all, and the marquess would descend breathing fire and brimstone, so that Peter would have to argue his case point by point. But in the end, the marquess simply rolled over like a great big pussy cat. It was disappointing.

That was perhaps my biggest gripe about the book, that it was too bland and predictable, with very little bite. There was just one moment where Peter showed an unexpected spark of fire, when he’s asking Anne’s father for permission to pay his addresses.

[The baron] “You don’t mind she is blind?”
Why, for the love of god, do people keep saying this, thought Peter. If he minded, he wouldn’t be asking, would he? He wanted to marry her because he was in love with her.

I would have liked a lot more like this.

I mentioned at the start that the writing style is rather simplistic, and frankly it got a bit dull reading about every trivial interaction between the characters. It also got repetitive. Some repetition was understandable, to show both Peter’s and Anne’s separate reactions to the same event, but with a little more effort that could have been shown without going over the same scene twice. And some was just unnecessary, as Peter explains his actions to various different people. There’s a lot that could have been tightened up. On the plus side, grammar and punctuation was good, and so was historical accuracy. There was only one place where Lord Peter was incorrectly called Lord Wilson, everyone had lunch far more often than was usual in the Regency, and the waltz was the modern version (but the true Regency version wouldn’t have worked for this situation, so I forgive it).

Overall, despite the problems I’ve mentioned, I did enjoy the story, and I was rooting for Peter and Anne right from the start. What keeps it to three stars for me was firstly, the plodding and repetitious writing style that made it a bit dull, and then the horribly abrupt ending, which stops dead directly after the proposal. Poor Anne doesn’t even get a chance to answer. Anyone who’s a fan of long, mushy epilogues should definitely steer clear of this one. But if that doesn’t bother you, this is a charming and uncomplicated short read.