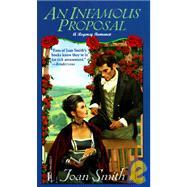 This was an absolute riot. Not a perfect read, on account of a bunch of wildly anachronistic word choices, but the characters were hugely entertaining, the plot was delightfully wacky and the slow adjustment of ideas by the protagonists was well done.

Here’s the premise: Emma is just twenty-two, but having married at seventeen and being now widowed and emerging from mourning, she feels she’s not really of an age to be thoroughly independent. Her papa thinks so too, and is threatening to impose dragonish Aunt Hildegarde on her as a much stricter chaperon than laid-back, novel-reading Miss Foxworth. This is an emergency – what she needs, and at once, is another husband, or at least a quick betrothal to a compliant man, to deter the dreaded aunt. And who could be more perfect than her husband’s old friend and neighbour, Nick, Lord Hansard, who has always flirted with her and has been so attentive while she was in mourning? He’s perfectly biddable, so he can be brought up to scratch, can’t he? But when he doesn’t take the hint and propose, Emma rushes into a proposal herself, only to be shocked and mortified when he refuses her.

Nick is a kindly soul, however, and although he rather disapproves of Emma, thinking she’s far too flighty, he does agree with her that she needs a husband. Therefore he decides to help her on her way to a second marriage by introducing her to suitable gentlemen. Just how suitable (or otherwise!) they turn out to be forms the bulk of the plot, and all the while, Nick is gradually realising that Emma is not as air-headed as she appears, and Emma is realising that Nick is even more perfect for her than she’d thought.

This is one of those books where the romance builds gradually. There’s no great revelation, just two people growing increasingly convinced that the possible suitors aren’t suitable at all, when compared with the more obvious match right under their noses. Since we get the point of view of both Nick and Emma, we see in fascinating details how they each begin with a rather disparaging opinion of the other, and slowly come to appreciate each other. And all the while, the suitors are providing the comedy. Cousin James, in particular, is a hoot, swearing that he’ll be a reliable and faithful husband… but not quite yet, please.

The whole book is a delight, beautifully written and neither too implausible nor too silly (although it wouldn’t be so funny if it wasn’t a little bit silly). I loved every minute of it (yes, even the outrageously anachronistic words – sicced, anyone? In a Regency?). Five stars.