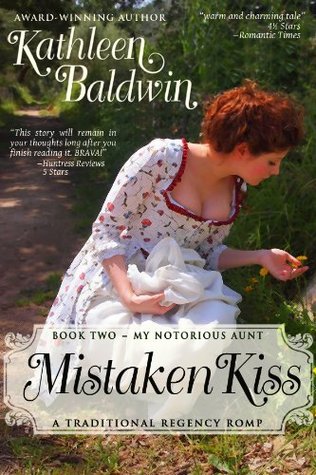 This is an oddball one. The start is delicious. Willa is the sister of a clergyman, steeped in the logical and philosophical debates of her brother and his friend, Sir Daniel Braeburn. When her brother realises that she is growing up (and Willa’s breasts have a great deal to do with this observation, to very amusing effect), he decides that she should marry his fusty friend, so that the three of them can go on exactly as before. Willa isn’t completely unwilling, but she feels that they only way to determine whether she and Sir Daniel would suit is to kiss him.

This she sets out to do, but being very short-sighted, and having to remove her spectacles before undertaking the deed, she ends up kissing the wrong man, Alexander Braeburn, the brother of Sir Daniel. Naturally, the passionate kiss she shares with him turns everything upside down. And from there on, the game is to get the two together. To spin things out (because obviously two young people instantly attracted to each other and with no obstacles to marriage cannot be tolerated in a Regency romance), Willa is whisked off to London by batty Aunt Honore, who puts her in all sorts of near-compromising situations in order to raise the protective instincts of her reluctant swain.

And… that’s about it, really. There are some side plots involving her friend and his, which are pretty silly, but no worse than most Regencies, the writing is good, the two main characters are lovely, and there’s some nice business with the horse breeding which the hero is involved with. Oh yes, and it’s laugh-out-loud funny. My main concern is that the frivolous side plots so quickly twist from amusing to serious. The boating incident, for instance, which was very funny initially, and I loved that the heroine deduced what was going on and got herself out of the boat, but then the whole escapade veered off into near-tragedy, a startling change of tone. And the batty aunt was quite dangerous, I thought, in getting Willa into some quite dodgy situations. I didn’t find her funny at all.

But overall, an entertaining and enjoyable read with a nice romance, a little spoiled by the abrupt changes of tone. Four stars.