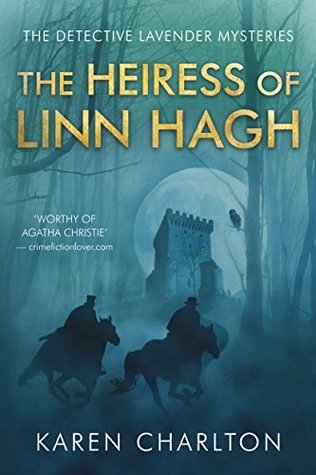 This book should have been right up my street – Regency era, murder mystery, a locked room mystery, even! What could be better? Well, quite a lot of things as it turned out. I don’t know if this is the author’s debut work, but it certainly reads that way. It’s clunky and uneven, and much of it just doesn’t work for me.

I like the idea very much – Stephen Lavender, a Bow Street Runner (an early kind of policeman) is sent to Northumberland with his trusty constable Woods to investigate the mysterious disappearance of an heiress from a locked room. Some of the background colour is excellent. The scene with the prostitute, while it has no relevance to the plot whatsoever, and is there only to show how much research the author has done, is nevertheless an effective introduction to the seedier side of London life, complete with holes in the prostitute’s stockings.

But then it’s off to the north by coach and another irrelevance. The coach is held up by highwaymen (yes, that tired old chestnut) and our two stalwart policemen perform the necessary heroics to avert disaster, aided by a Spanish lady who happens to be handy with a gun. This is where the book goes off the rails, because Lavender unaccountably gets the hots for the Spanish babe (who’s a married woman, by the way) and fancies his chances rather. He essentially forces her to have dinner with him alone, something no respectable woman would or should do, and is very disappointed when she fails to offer him the expected invitation to her bed. I don’t know what this is supposed to achieve, but frankly, it made him very unlikable to me. I do expect a Regency hero to demonstrate some care for a woman’s reputation, and not just attempt to screw her the first time he meets her. Not a nice man.

But then it’s on to the mystery, and another array of cliches – the unpleasant step-brother with the even more unpleasant friends, the wicked step-sister, the loyal maid, the simple but harmless brother, oh and let’s not forget the gypsies who are unfriendly initially but come round when the hero renders them some service or other (stop me if you’ve heard this plot before). There are the usual array of set-piece confrontations, which don’t throw up too many surprises.

There’s a lot of Gothic about this, and the mysteries (the locked room and the disappearing heiress) are resolved quite nicely. The writing’s good, too, and the author’s done her research. This is possibly one of those series that will settle down and become unmissable by about the third book, but for me the clunky pacing, the unlikable characters and especially the very unpleasant main character keep this to three stars for me.