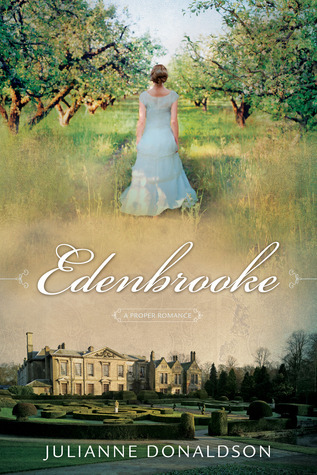 This is a wonderful book – exquisitely written, with well-drawn characters and a beautifully developed relationship. Too often there’s an instant attraction and then they’re head over heels in love, as if that’s all it takes to set a couple on the path to a lifetime of happiness. I far prefer a slow-blooming love. The book also has an astonishing sense of time and place. I wanted to be at Edenbrooke too, and sink into its welcoming arms, and feel as if I were coming home, just like the heroine.

Marianne Daventry has lived with her grandmother in Bath since her mother’s death a year earlier. Her twin Cecily lives with another relative in London, and their father has taken himself off to France. Marianne is bored to tears, missing the countryside and its natural beauty, and is delighted to receive an invitation to stay at Edenbrooke, where the man her sister hopes to marry lives. Edenbrooke offers her the open country her spirit so desperately needs – and a man who delights and infuriates her in equal measure.

If this book were nothing but Marianne’s return to the freedom of nature and her encounters with the infuriating Philip it would be perfect. Unfortunately, it depends on coincidence, a villain and an ignorance of her host’s family that beggars belief. I also have a lot of quibbles about Philip’s behaviour, which is far too forward for a man supposedly watching the proprieties.

The book also fails one of my primary tests – would the plot fall apart if the characters sat down and talked to each other? In this case, the whole plot hinges on Marianne not knowing precisely who Philip is until a long way into the book. Despite my quibbles, I enjoyed this enormously, because the writing is just so good, worthy of five stars. As it is, the reliance on coincidence and non-communication keep it to four stars.