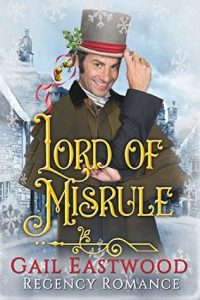 This is a difficult one for me to judge. On the one hand, it includes several elements on my list of great big no-nos. On the other hand, it has a really, really likable hero and is absolutely dripping in charm. Which makes it pretty well irresistible.

Here’s the premise: Adam Randall, Viscount Forthhurst, the heir to an earl, is heading home for Christmas in disgrace, after scandalously breaking off a carefully arranged betrothal to a suitable young lady. However, fate, in the shape of a broken curricle wheel and a snowstorm, contrive to stand him in the tiny village of Little Macclow, in Derbyshire. Heroically participating in the Christmas Eve partying with the yokels, he manages to make himself the Lord of Misrule for the festivities. But there’s a silver lining to this disaster, rather a beautiful one – a certain vicar’s daughter by the name of Miss Cassandra Tamworth.

From this point on, the plot runs on rails that any reader with a few Regencies under their belt could predict, so I won’t bore you with that. Let me get my list of no-nos out of the way first. The hero and heroine have the hots for each other instantly. Well, OK, that does happen, at least attraction happens, I’m not sure about all the warmth fizzing through Cassie’s body, although the image of a little candle popping alight inside her every time she looks at Our Hero is delightful (see what I mean about charm? This book positively oozes it).

Then there’s the fact that bad-boy Adam with his reputation as a Devil, as he warns Cassie himself, is actually a great big pussy cat, practically purring with bonhomie. Not only does he help Cassie hang the festive greenery, he turns out to be a dab hand with small children and elderly ladies, too, not to mention buddying up to the working men and… well, he just gets along with everyone in the village. So Cassie, who as the vicar’s daughter, is the mainstay of the village, running the schoolroom and organising village events more or less single handedly (or so it seems), sees Our Hero at his best. Or maybe she brings out the best in him.

But the return home to face the music for that broken engagement can’t be put off indefinitely, and inevitably there’s the culture clash between Cassie, whose father is resolutely opposed to all things aristocratic, and Adam, heir to a long line of aristocrats. I was rather hoping for fireworks here, because up to this point there was very little conflict, but everyone seems to be very friendly towards Cassie. So in order to put a hitch in the otherwise inevitable downhill run to the happy ending, we have the Great Misunderstanding. That’s a shame, because up to this point, Cassie has shown great resourcefulness and intelligence, so when she hears unpleasant rumours about Adam, does she ask him about it? Nope, she runs away, that’s what. Oh, Cassie! Have a little faith, dear.

Naturally, all comes out well in the end, although it takes heroic efforts by Adam to achieve it. There are no real villains in this book, and no, I don’t count Mr Pratt the curate, who isn’t a particularly likable man but doesn’t do anything terribly villainous. Nor does the expected family opposition to Adam amount to much. This is simply a gentle, amusing and very seasonal love story between two people who might never have met, but for mere chance. Or was it? The author leaves it to the reader to determine. A charming story with a wonderfully heroic hero, which only that annoying misunderstanding keeps to four stars.