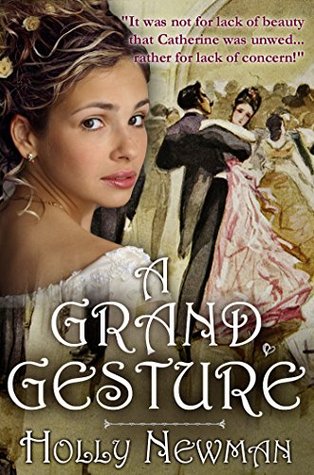 There’s a lot to like about this book. The heroine, Catherine Shreveton, is sensible and independent-minded without falling into stupidity as soon as a man appeared. She’s a talented horse-breeder and rider, who helps her uncle with his stud farm, which she will inherit. She neither wants nor needs a husband, so when her aunt invites her to enjoy a London season and makes it clear she thinks Catherine is both poor and plain, and this is charity on her part, Catherine determines to play the role imagined for her. This is an inversion of Georgette Heyer’s Arabella, where the heroine is poor but the ton thinks her wealthy. Neither lady is plain, of course, for naturally a Regency romance must have a beautiful heroine.

And a handsome hero, and here is the Marquis of Stefton to fill the breach, but however handsome he may be, he almost stumbled at the first hurdle. A hero has to have some heroic qualities, and while he may fall short at the start of the book, and raise himself to full hero status through some kind of redemption, there are certain actions which put him beyond the pale. One is to stand by while the heroine is harmed in some way, and the other is to mess about with other women. Here our hero comes within spitting distance of both of these failures. Almost the first time we see him is at an inn where the generic villain is attempting to molest our heroine. Leaving aside the question of how long an inn would stay in business if it allowed its paying customers to be (possibly) raped on the premises, the hero’s inaction is inexcusable. Even if she seems to be defending herself pretty well, no gentleman would simply stand by and watch. Later, the hero is on the brink of returning to his mistress, and only fails to bed her by chance. So, not much of a hero.

The bulk of the book consists of the two dancing round each other in London, and this follows the usual pattern of suppressed instalust, with both sides pretending they despise the other. It’s pretty well done, though, with some nice set pieces, and I enjoyed Catherine’s emergence from her drab disguise to become a stylishly dressed beauty.

One quibble on historical accuracy. Generally speaking, very little in this book triggered my over-sensitive pedantry alarm. The writing style, dialogue and historical setting were all very convincing, and (my personal pet peeve) the author mostly got the titles right. Only one made me grind my teeth: why is the Countess of Seaverness called Lady Harth rather than Lady Seaverness? That made no sense to me. However, the other titles seemed fine, so I set it down to some obscure quirk of the British Peerage, an institution which has more exceptions to the rules than normal cases.

A good traditional Regency, well-written, with no sex scenes that I can recall. Four stars.