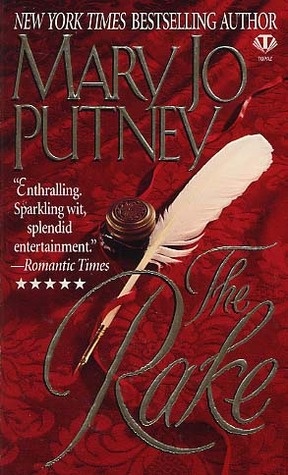 It’s a testament to the author’s skill that this book managed four stars from me, because there’s a great deal about it that really rubbed me the wrong way. The hero, for instance, the supposed rake of the title, turns out to be a great deal less villainous than advertised. Most of his duels seemed to consist of summary justice when the law refused to intervene, or defending a lady’s honour, or simple self-defence. His conquests of the female variety seemed to hurl themselves at him, rather. Not a single virgin was deflowered by him, so far as I could make out. His worst offence was drinking to excess, which was more or less par for the course in those days, and anyway he spends the whole book trying to keep off the booze. Not so much a villain as a hero in disguise. Grrr.

Then there’s the heroine. If there’s one thing I hate about a Regency-era novel, it’s finding a character who is really just a modern woman in period skirts. Or trousers, in this case. She’s a reformer, so naturally she’s introduced crop rotation to the farms, and set up small businesses to help out the soldiers displaced by the end of the war, and is busily educating all the children. Oh, and let’s not forget the smallpox vaccination program. And she’s good at everything, and has made all the farms and businesses profitable and everybody loves her, especially the three charming orphans she happens to be raising. Grrr.

What about the plot? Well, there isn’t much of one. There’s a villain, who’s suitably villainous in a cartoony, mustache-twirling kind of way, easily spotted and even more easily defeated. There are some minor romances along the way, which the author never really bothers to develop beyond the most rudimentary meet-fall-in-love-let’s-get-married approach. There are some set-piece encounters – the rescue scene, the ballroom scene, the woman seen creeping out of the hero’s room, the heroic battle scene, you know the sort of thing. And then there’s the stupidly noble for-your-own-good action that involves the hero and heroine splitting up without talking to each other. These are two people who’ve displayed a great deal of intelligence and articulacy, not to mention some very intimate moments, and they can’t simply sit down and talk things through? Grrr.

And then there’s the backstory. Now, I have no complaint with the hero, because he’s had a pretty miserable time of it, all things considered, and as far as I’m concerned, he’s fully entitled to be as grumpy as he likes about life. But the heroine – oh, ye gods, what is there to say about a woman who walks away from her life for such a ridiculously idiotic reason? And then stays away? A great deal of the early part of the book is concerned with building sympathy for this woman in her precarious position, constantly poised on the brink of starvation or worse, when in fact she could have fixed everything in five minutes. Grrr.

Something about the main characters got under my skin. Their obvious physical attraction to each other, their verbal sparring, their repeated attempts to understand and help each other, and eventually their complete acceptance of each other, warts and all – it all worked to make them fully rounded people, and the intensity in their interactions was mesmerising. Their personalities towered over the rest of the book and lifted the story into the realm of the extraordinary. If only there had not been so much to dislike… Four stars.