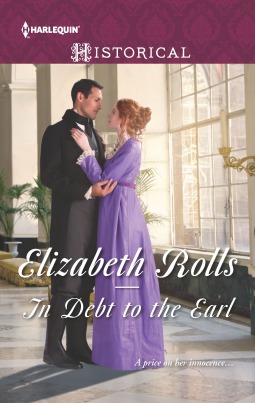 An odd book, and not my usual cup of tea, since it focuses very much on the seedier side of Regency life, which is not my favourite thing. Fortunately the emphasis is largely on the relationship between the hero and heroine, but the book felt somewhat old-fashioned, with the hero hell-bent on making the heroine his mistress, and the romantic conclusion a long, slow time coming.

The premise is that our hero James, the Earl of Cambourne, is set on retrieving a debt from a card sharp when he discovers that the girl sharing his cheap lodgings is not his mistress but his innocent and surprisingly well-bred daughter, Lucy. Naturally he’s handsome and she’s beautiful (aren’t they always?) so the two have the hots for each other in no time flat. Before long, he’s buying her cake and coal and offering to take her out of poverty and the reach of her flaky father by making her his mistress. Now, on the one hand he never forces the issue and even spends time ‘courting’ her to ensure she’s happy with her choice, but on the other hand, since her father has abandoned her and her options are, essentially, starvation or him, what choice does she have?

The part of the story that focuses on the growing love between the two of them is very much the strongest part of the book. Charles Fox and his supposed mistress, Elizabeth Armistead (in fact, they had been secretly married for some years) are introduced as a way to raise the question of the status of mistresses in Regency society. There’s a telling moment when James and Lucy are at Vauxhall’s and bump into some of his relations. Naturally, he can’t introduce Lucy to the ladies because she’s about to become his mistress, and she begins to realise just what she’s letting herself in for (although considering the alternative is starvation or worse, a little social disapproval seems a small price to pay).

Behind the romance is the nastiness of card sharps and the Regency underworld, where everyone is terrified into loyalty and obedience, and there’s a knife to the throat for anyone who steps out of line. I didn’t enjoy this element of the story but needless to say everything comes right in the end, the bad guys get their comeuppance and James realises at the very, very last minute that he really wants to marry Lucy. Phew. So that’s all right then. Even so, it took him a very long time to get to that point, and I strongly disapproved of his tendency to bed the heroine directly after these moments of high tension, when she was at a low ebb. When a girl’s only just escaped being sold to the highest bidder to be raped, a gentleman should be content to tuck her into bed with a cup of tea and leave her in peace, no matter how much she pleads for something more. And yes, the sex scenes are pretty graphic.

An interesting story, with a spread of believable characters (I particularly liked the pickpocket with the heart of gold, Fitch) and some nicely romantic moments, even if the hero is very slow on the uptake about his own intentions. Four stars. 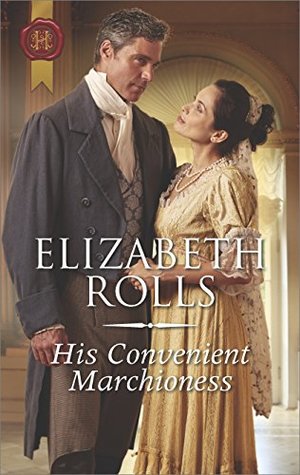 This is very much a book of two halves. The early chapters, as the hero and heroine inch towards an accommodation, are charming. The later chapters, as we’re inundated with relatives and drama, I found less successful but still enjoyable, and hooray for an older and wiser couple (he’s fifty and she’s thirty two).

Here’s the plot: Our hero, Hunt (the Marquess of Huntercombe), lost his wife and children to smallpox years ago, and now that his remaining heir has died, he urgently needs to marry and start begetting again. His sisters are pushing him towards newly-out candidates, but the prospect of a bride young enough to be his daughter appals him. How about a widow, one with children already as proof of her fertility? And almost at once he meets a most unlikely prospect, the impoverished widow of a duke’s younger son, living outside good society. He’s strongly attracted to Lady Emma Lacy, and her children, Harry and Georgiana, take to him, so what can go wrong? Only that she refuses him, that’s what. But when her son, now heir to the dukedom, is at risk of being taken from her, she realises she has to have a husband who can protect her children.

So the stage is set for a marriage of convenience, and this aspect of the book is beautifully written and very powerful. Both of them have to learn to make accommodations for their new situation, they both have pasts that haunt them and the children create a whole swathe of unexpected tensions between them. I particularly liked the awkwardness of marital sex with a relative stranger (yes, there are some graphic sex scenes, so avoid if that’s not your thing).

And then there’s the difficulty of re-introducing the scandalous Emma into the upper echelons of society again. But this is where the plot starts to go slightly off the rails. Firstly, there’s a deluge of relations, on his side, on hers and from her husband’s family, who are uniformly hostile towards Emma and hellbent on interfering. It would be lovely if these various families could include at least one or two members who were as friendly and downright normal as Hunt and Emma themselves.

Then there are the left-over characters from what is clearly a previous book in the series, which I hadn’t read. This wasn’t a problem, plotwise, but they were wheeled out with the clear expectation that readers would fall on their necks with cries of joyful recognition, which falls a bit flat when one hasn’t actually read that book. I discovered that I already own it, so I will be reading it, but it was a tad disconcerting, all the same.

And then there’s the drama part of the story. I won’t go into the details of this to avoid spoilers, but to my mind it made zero sense. If the villain had set out with a certain aim, then there were far simpler ways of going about it, and it seemed to me that the threat still existed at the end of the book (but maybe I misunderstood that part, who knows).

Nevertheless, even with the somewhat illogical villainy, the relationship between the main characters was always front and centre, and was strong enough to carry the story. The author’s grasp of the Regency era was exceptionally good, and my only quibble was whether Lady Emma Lacy’s title should actually be Lady Peter Lacy. Not totally sure about that. A great read, with a fine mix of the emotional and the dramatic, with a few humorous interludes as well. A good four stars.