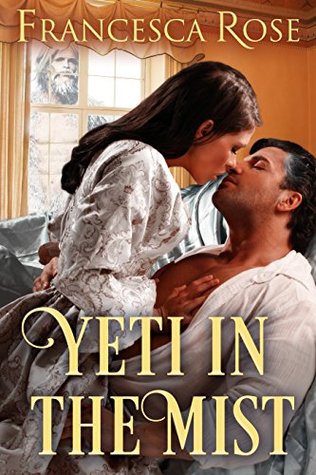 OK. A weird one. This showed up as a sponsored ad underneath one of my own books, and I was intrigued enough to try it. It’s set in the Victorian era, and involves a young wife, her injured husband and a yeti. Um, yes. This is a world where yeti are a part of society, albeit on the fringes of it. So we’re talking paranormal romance, I guess?

The premise is that Catherine’s husband Reginald has been shot and left paralysed during action with the East India Company Army. His Yeti batman (or just friend) Yolann lives with them. When Reginald tells Catherine to take a lover, he’s hoping she’ll have the child he can’t give her. She finds Yolann a more attractive option, and takes him as her lover.

I liked the way Yeti culture is drawn in this book. The Yeti have a matriarchal multi-mate society, where a woman takes several male mates but she’s the one in charge. There are some lovely descriptions of Yolann’s fur and the status markings and the style of dance they use for meditation. It’s all rather well done.

There’s a shed-load of sex in the book, graphically described, so if that’s not your thing best avoid this one. There’s also some side plot business about their various brothers which, to be honest, I skated over since it wasn’t very interesting. I was far more intrigued by the Yetis, frankly. An unusual read, but I enjoyed it. Four stars.