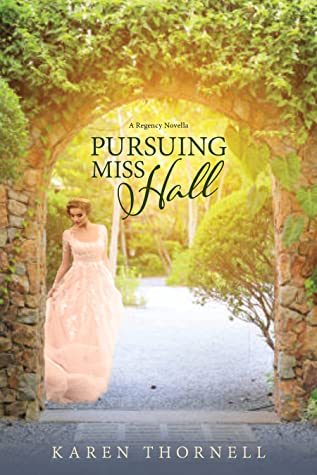 This is the author’s debut, a short but fun read. There’s nothing earth-shatteringly original about it, but the hero and heroine are nice, likable people, the dilemma is one that must have been common in the Regency era and the writing is excellent, with a dash of humour. I enjoyed it.

Here’s the premise: Margaret (Meg) Hall, a baronet’s daughter, missed her season in London because she was very ill. Now recovered, her mother wants to push forward with the desirable match that would lift the whole family up a notch, socially. She throws a house party with three eligible suitors. Meg will be expected to marry one of them – preferably the highest ranking, a viscount. Meg dutifully prepares for her fate. Meanwhile, her lifelong friend and neighbour, Nathaniel (Nathan) Blake realises that he can’t wait any longer to declare his love for Meg. It’s now or never!

Now, the pragmatist in me wants to know why he doesn’t just go straight to Meg’s father and ask permission to throw his hat in the ring. But of course that would make the book about three chapters long, so naturally that doesn’t happen. Nathan’s mother, who is totally on his side, suggests that his first task should be to win over Lady Hall, and so that’s what he does, rather than openly courting Meg. Since Lady Hall is very much against Meg marrying into the lowly Blake family, she takes every opportunity to steer him away from Meg, so he finds himself taking care of the other young ladies of the house party and watching impotently as the three official suitors circle round Meg.

The three suitors are all pretty unappealing. The viscount is boring, the second one seems more interested in another young lady, and the third seems to be distinguished only by having protruding teeth. It would have been more interesting, perhaps, if they had been more rounded personalities, but since Lady Hall has already settled on the viscount as the best option, he’s the one we see most of, and the other two are mere ciphers.

Meg’s problem is one that must have presented itself to a great many Regency young ladies – marry to oblige one’s family, or wait for love to come along. Meg is a dutiful daughter who fully understands what she is expected to do, and she obediently tries to find something to spark her interest in the viscount. Meanwhile, she is realising that she might have real feelings for Nathan. If only he were one of her suitors…

And this is where the book falls apart for me. Nathan does, in the end, simply take the bull by the horns and talk to Sir Robert Hall about Meg, but so does the viscount, so when Meg talks to her father and hears about the viscount’s proposal, she decides on the spot that she’ll have him, and refuses even to hear who the other suitor is. Even when her father tries to steer her that way she doesn’t want to know, and for me that’s a total plot fail. There is no woman on earth who would not want to know who the second man was. This is the author spinning out an already short book to build the suspense. I really don’t like that. It feels manipulative.

But of course it all comes right in the end, and there are some nicely dramatic and romantic moments along the way. The author’s feel for the Regency is excellent, although I’m not convinced that it was commonplace for fathers to deal with proposals, accepting or rejecting them on behalf of their daughters. Asking permission to pay your addresses is one thing, but the idea that a father could simply decide on a suitor and perhaps not even tell the girl about proposals he’s received on her behalf is somewhat weird to me. It’s not like that in Jane Austen, and she’s my ultimate authority on the subject. There are a few Americanisms, but mostly in grammar — ‘look out the window’, for instance, instead of ‘look out of the window’. Trivial things that knocked me out of immersion but wouldn’t worry most readers.

This is a very promising debut, not overly dramatic, but a light-hearted and enjoyable read. Only that plot logic fail keeps it to four stars for me.