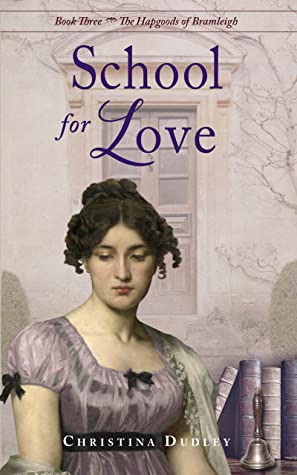 Sometimes I wish Goodreads had more than five stars in its arsenal for books like this. I give a book five stars if it totally entertains me, even if it may have flaws, but there are books that rise above that level and this is definitely one of them.

Here’s the premise: the series is based around the Hapgood family of Bramleigh, the happy-go-lucky dog-mad squire, his permanently invalidish wife, and his four daughters. With one daughter safely (if eccentrically) married off in book 1 of the series, in book 2, the squire’s cousin, Hugh Hapgood, newly widowed and with three children to raise, arrived with the dutiful but sensible plan of marrying the oldest and rather beautiful daughter. She resolved that issue in spectacular style by eloping with a rakish but very charming young man, and with the two youngest daughters too young to marry, Hugh must think again. Without a wife, what is he to do with the children? He finds a place with a local clergyman for his son, Lionel, but the two girls, Hetty and Rosie, are sent away to school.

That lasts no more than a few weeks before scarlet fever and the girls’ homesickness force a rethink. They’ll do anything to avoid being sent back to school, Lionel’s very happy where he is, thank you very much, and Hugh isn’t keen to go back to his former home and the interference of his sister-in-law. The answer is to find himself another candidate for a wife, but there are different opinions on how to manage that, and the children are just as involved as anyone else.

There is one obvious candidate – thirty-one year old Rosemary deWitt, daughter of a man formerly in business but now knighted and living the life of a respected country gentleman. Rosemary isn’t a great beauty but she has a respectable portion and she’s had one or two offers. Not enticing enough to accept, however, and she doesn’t want to marry a man who’s only interested in her fortune. She contents herself with parish work and teaching a few local girls at a time the rudiments of reading and writing. It’s frustrating, though, when they learn a little and then drift away.

But children aren’t deterred by lack of beauty or interested in fortune, so Hugh Hapgood’s children take an immediate shine to her and decide that she’ll do very well as a new mama. And so they begin their plotting…

The children’s machinations are a big part of the plot, so if you don’t enjoy the scheming children trope, this is probably not the book for you. I suppose they’re a little mature for their years, but it wasn’t a problem for me and their devious little schemes were very funny (especially Lionel’s attempt to engineer a compromising situation so that his father would be obliged to marry Rosemary deWitt). But really, their schemes are hardly necessary, when the two principals are well on the way to matrimony already, without any help from anybody. Rosemary discovers the funny and charming man that thirteen years of unhappy marriage had all but suffocated, and Hugh has long since learnt to value qualities beyond appearance. They both discover that being in your thirties is no protection against the inner turmoil of falling in love.

And then disaster happens, which had me (literally) in tears. Even though I knew that of course these two were going to get their happy ending and I even suspected how it would happen, still the grief of the two lovers tore me apart. I punched the air with glee when Hugh had his mad moment and decided that… well, you’ll see. I won’t spoil the ending.

Here’s what I loved about this book: firstly, the characters. Not just the two leads, although Hugh, so serious and stern-faced initially and so passionate at the end, was especially delightful. Rosemary, the dutiful spinster who seems so past the age of matrimony but still has a wilful heart, was also easy to love. Then there were the children: Hugh’s three, Lionel, Hetty and Rosie, and also the Bramleigh girls, Margaret and Edith, who were all delightful.

But really, it’s all of them. This is an ensemble cast, set deep in the English countryside, far away from the usual Regency haunts of London, Hyde Park, Almack’s and so on. This is a setting and a group of people who might have existed any time from the middle ages onwards. The gentry, like the Hapgoods, the deWitts, the Porterworths and the Birdlows. The clergy, like Mr and Miss Benfield. And the shadowy, but still vibrant, characters of the servants. Every one of them feels alive and active and very, very real.

There are no actual villains in this all-too-believable world, but equally there are no saints either, just ordinary people doing what they can to get by and acting in whatever manner seems fit to them, pursuing their own ends without treading too much on other people’s toes. And sometimes that works and sometimes it just makes things worse, and they have to do whatever they can to fix things, or put up with the consequences. One review compared this with Middlemarch, both in the range of characters and the way that they are all likeable in their different ways, even when they’re self-absorbed or unobservant, and I can see that.

And, just as in real life, the characters ping off each other and cause actual changes. For instance, when Lionel first comes to the Benfields for tuition, he tells Rosemary that he doesn’t need to study or go to university because he’s going to be a country gentleman like the squire and spend his days doing sporty, outdoorsy things. But when he tells Rosemary that he plans to marry his cousin Edith, she asks him if he really thinks she would want to marry an uneducated man. And so gradually he changes his opinion. Such a small detail, but so true to life.

I’ve waxed lyrical about this book for a multitude of paragraphs, but was there anything I disliked about it? There was, but I have to say that it was not enough to knock a star off my rating. It was a repeated irritation, but everything else was so exceptional that I can let it go. I’m talking about the Americanisms[*]. I know there are a number of authors who deliberately choose to write with American style and spellings, and that’s fine. That’s a creative choice, and I would never quibble over an author’s right to do that. Besides, there are plenty of Regencies where there’s so much suspension of disbelief required that a few gottens and a chipmunk or two is neither here nor there. But when an author has created such a beautifully crafted Regency, where every element is utterly convincing, the use of gotten drops me instantly out of my immersion in the story. The two that tripped me up most were ‘write someone’ instead of ‘write to someone’, and the jarring overuse of ‘shall’. A phrase like ‘Lionel shall miss his sisters’ just sounds wrong to me, although I couldn’t even explain why. And these little tripwires, and a few others, are dotted throughout the book. [*] The author tells me these have been fixed.

But that is, for me, the only conceivable grumble about the book, and it’s a very minor one. Don’t let it put you off, because otherwise this book is as near to perfect as it’s possible to be. It could just about be read as a standalone, but why would you want to? Start with The Naturalist and then read the whole series. I’m going straight on to Margaret’s story, and then Edith’s. The chores can wait. Five hundred stars.

2 responses to “Review: School For Love by Christina Dudley (2020)”