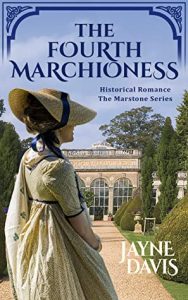 Another absorbing read from Jayne Davis, with a basic plot that might have been a bit dull in other hands (that well-worn scenario, the choose-a-bride house party) spiced up with an intriguing spying plot.

Here’s the premise: James, the Marquess of Harlford, is coming to terms with his unexpected ennoblement after his older brother’s death. He’d rather be pursuing his scientific research, but his mother is determined to marry him off to prevent eccentric Uncle David from inheriting. She arranges a house party with some suitable candidates. Among the chosen guests are two who’ve wangled an invitation for reasons of their own. Gossipy Lady Jesson and her companion Alice Bryant have an ulterior motive – to find out if Lord Harlford’s secret letters to France mean he’s a traitor to his country. Alice doesn’t like what she has to do, but when James starts to pay attention to her, her position becomes very awkward indeed.

It’s easy to like both hero and heroine here. James is the sort of person we’ve all met, someone who’s so engrossed in his own affairs that he fails to see what’s right under his nose. Not from lack of perspicuity, either, but simply because his thoughts are so occupied that he just doesn’t notice what’s going on. Alice is smart and sensible, and able to rescue the hapless James from the machinations of his mama’s multitude of ambitious guests. He, in his turn, rescues her from machinations of a different sort. Being thrown together in this way leads them both into a rather tentative courtship.

But there’s more than Mama and a rash of title-hunting young ladies to contend with, because if James isn’t a traitor, who is? And they will stop at nothing to get the information they need about James’s experiments. And so this part of the plot hurtles into melodrama and danger and an exciting rescue plan, and although there was nothing terribly unexpected in any of this, it was still a dramatic page turner.

Along the way, there are some nicely eccentric side characters, like Uncle David and the Dowager Marchioness, and if the house party setting throws up few surprises (why are wannabe marchionesses so unsubtle?), it’s still a fun read, beautifully written and with impeccable historical research. Five stars.