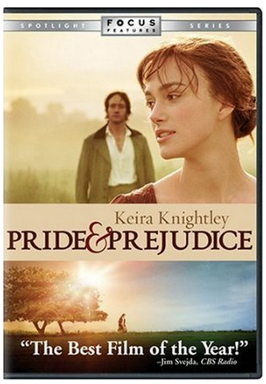 Where to begin? There is so much wrong with this movie I can’t even get my head round it. Let’s start with the good, or at least worthy, parts. Firstly, I like the attempt to place the story in the rougher, more robust late-Georgian era rather than the starchier, more prim version of the Regency so beloved of most adaptations. The early scene set in the Meryton assembly gave a good impression of the more energetic style of dancing that was very much part of the era. The wildness of the younger daughters fits in well here.

Secondly, the romantic element is played up quite well. Elizabeth’s emotions are well displayed, starting with real distress after reading Darcy’s letter, and showing her developing feelings thereafter. At least she’s shown having some feelings before she sees Pemberley, which always strikes me as a particularly awkward moment to start liking Darcy, as if one look at the house is enough to sway her, the avaricious little minx. So I liked seeing a degree of misery before that. Keira Knightley, who is spectacularly ill-suited for the role in almost every other way, pulls this off with aplomb, having strong enough acting skills to pull off the love-sick scenes. And the final scenes are well done and have real emotion – the reunion with Darcy, and the interview with Mr Bennet.

And thirdly, not a good point, but an observation. A two hour movie is necessarily going to be curtailed in a score of ways. Characters were cut out wholesale – Maria and Sir William Lucas, Mr and Mrs Hurst and all the Gardiner children got the chop. Favourite scenes were merged or cut and almost everything was truncated, sometimes to the point where it made little sense. But at least all five Bennet girls survived.

So. On to the bad stuff. Settle down, this is going to be l-o-n-g. Let’s talk about the farm first, that whole thing with the pig, and geese and chickens and dogs and mud everywhere. OK, I get that the idea was to show the Bennets’ lowly status in society, the fact that they haven’t risen very far above the rank of farmer. But… Mr Bennet’s income is some two thousand a year, almost half of Mr Bingley’s. There is NO WAY ON EARTH that they live in the midst of their own farm. The set designer has taken a single line of the book (’[the horses] are wanted on the farm more often than I can get them’) and extrapolated to plonk the entire household in the middle of the farm. Every gentleman of the era living in the country had a home farm to supply their food needs; none of them lived on the farm. Stupid, stupid, stupid.

There are so many historical inaccuracies in the film. The costumes were hit and miss, and I hated that Elizabeth never seemed to wear a hat or gloves (or shoes, sometimes!). I suppose it was intended to show her independence of spirit, but really it shows her to be quite beyond the bounds of propriety. A lady never went out without a hat, and not wearing gloves was incredibly fast – a man might touch one’s bare skin! The horror! And let us draw a veil over the whole matter of hairstyles for the younger girls, and the men, for that matter. Shudder. What were they thinking?

Then there was the question of forms of address. Darcy never seems to call Elizabeth anything but Miss Elizabeth, even when alone with her, even when there isn’t another Miss Bennet within fifty miles. If it’s meant to show intimacy or growing attachment, it fails. It’s just plain wrong. And then when Mrs Bennet and the younger girls arrive at Netherfield, they are announced as ‘Mrs Bennet, Miss Bennet, Miss Bennet, Miss Bennet’. Utterly wrong. It was perhaps intended to be amusing, but instead it just makes the scriptwriter look incompetent.

So let’s talk about the script. I’m not a purist, by any means, and I’ve already accepted the necessity for cutting and modifying to squeeze the story into two hours, but Jane Austen was a brilliant writer. Best to use her words as much as possible, surely? But no, the scriptwriter chose to toss out a great deal of well-crafted prose and replace it with something far more mundane. Sometimes it sounded like dumbing down, as when Elizabeth’s comment to Lady Catherine that she ‘plays, but very ill’ is changed so that she plays ‘poorly’. Is that because the scriptwriter thought the audience wouldn’t understand the expression, or because she herself didn’t? And some of the crucial interchanges lost much of their sense to the need to overplay the emotion, and OK, I get that sometimes Austen was dry and not emotional enough, so I can perhaps forgive that. But it also lost all the wit. The delightful exchange at the piano at Rosings where Elizabeth talks to Darcy through Colonel Fitzwilliam is condensed to bland nothingness, and ends with Elizabeth’s extraordinarily rude comment: ‘Maybe you should practise more’.

It’s the same problem with the chosen settings. Why was the first proposal scene set at a temple in the pouring rain? It creates a dramatic backdrop, and our main characters can be dripping to (presumably) symbolise their rejection of the proprieties (or something), but honestly, it was just silly. And then there was Pemberley. Elizabeth arrives in a carriage with her aunt and uncle, looks around the house (which looks more like a museum, to be honest), and gets lost. Fine. But then she comes across Georgiana and Darcy (wrong: they would never have been allowed in the house if any of the family were at home), is spotted, has her embarrassing conversation with Darcy and then – walks back to the village? Excuse me? Her aunt and uncle left her behind? To walk home alone? And Darcy let her do that? I don’t think so. And as for Lady Catherine turning up in the middle of the night – no, no, no, a thousand times no!

On the subject of Lady Catherine, here we have one of the stellar actresses of our time, Judi Dench, in a role she could fulfil with her eyes closed, yet somehow managing here to be merely ordinary. How does that even happen? With Jane Austen writing the lines and Judi Dench speaking them, what could possibly go wrong? I have no idea, but something did. Then there are Donald Sutherland and Brenda Blethyn, brilliant actors both, underwhelming as Mr and Mrs Bennet, apart from a couple of flashes where the script gave them room to breathe. Other actors were plain miscast, like Elizabeth herself (I’m not a great fan of Keira Knightley, but I’ve seen her much, much better than this), the younger sisters, Mr and Miss Bingley and Mr Collins. I read one review that said (paraphrasing) if one actor is wooden, you can put it down to bad acting, but if they’re all wooden, it has to be a more fundamental problem, either the script or the direction or both. I’d agree with that.

The interesting question is this: if I’d never read the book and never seen the BBC’s 1995 version, would I have rated this more highly? The answer is surely no. There is no charm here, no effervescent lightness of touch that would lift the film above the ordinary. The dramatic scenes of flowing frocks on the horizon or the hero and heroine dripping wet are plain silly. And frankly, any film that puts Judi Dench in the sort of role she was born for, yet manages to make her performance ordinary deserves to die. What an incredible waste. There are a couple of moments at the end when the script rises above the mundane, and I rather enjoyed that energetic country dance early on, but the rest of it was dire.

7 responses to “Film review: ‘Pride and Prejudice’ (2007) with Keira Knightley”