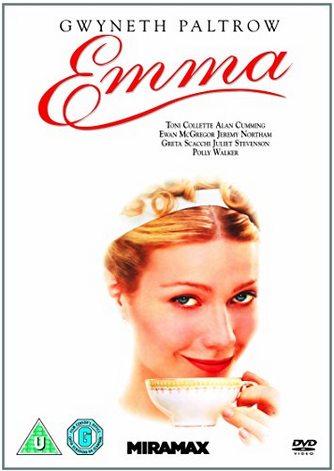 Two films based on the same book, released in the same year, both feature length not serials (albeit one a theatre movie, one made for TV) – what were they thinking? And yet – both are beautifully done, with great scripts, great actors in every role, great settings and attention to detail, to the point that it’s very, very hard to say one is better than the other. I watched them back to back and enjoyed both equally.

The movie version stars Gwyneth Paltrow in the title role and Jeremy Northam as Mr Knightley, while the made for TV version stars Kate Beckinsale as Emma and Mark Strong as Mr Knightley. There really isn’t much to choose between either of the ladies, although perhaps my personal preference would fall for Beckinsale, but only because I’ve always pictured Emma as dark haired, and the very blonde Paltrow jars ever so slightly. Of the men, again, personal preference would be for Jeremy Northam, but they were both admirably suited to the role.

Of the lesser characters, both Miss Bates and Harriets were perfect, and the Eltons in both films were excellent, too. Of the two Frank Churchills, I liked the Beckinsale version better, but only because the Paltrow version had dreadful hair (I know, how shallow of me!). As for the Jane Fairfax’s, if you stood them both in front of me, I’m not sure I could tell one from the other. The only character where I had a strong (and reasoned) preference was Mr Woodhouse – I thought the Beckinsale incarnation of Bernard Hepton encapsulated his old-woman fussing perfectly, while the Paltrow version seemed too vigorous, somehow. 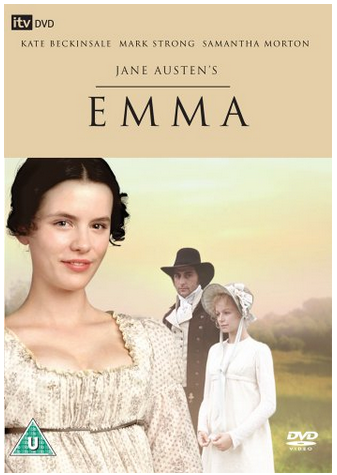 Some random thoughts. For the final coming together between Emma and Mr Knightley, I thought the Paltrow version captured the emotion better. The Beckinsale version, on the other hand, caught beautifully the dreadful situation of Jane Fairfax and her fragile emotional state. The Beckinsale film stayed truer to the book with regard to the Eltons – their smug, self-satisfied snobbery, very pleased with themselves, and perfectly suited. The Paltrow version of Mrs Elton was very entertaining, in constantly talking over her husband so that he can barely get a word in, but it leaves him looking rather as if he may regret his marriage, a step away from the book. But I did like her talking to camera during the wedding scene. The Beckinsale film ended with the massive harvest festival dance, clearly designed to bring all the bridal couples together at once, even farmer Robert Martin. I didn’t think it was entirely successful, but it wasn’t a problem.

In many ways, Emma is perhaps the best of Jane Austen’s works. I love it, because all the heroine’s troubles arise from her own personality. If she had not meddled in Harriet’s affairs, if she had been kinder to poor Miss Bates, if she had taken Jane Fairfax under her wing as she should, then everybody’s lives would have been smoother. Of course, then there would have been a lot less story to enjoy!

But one aspect of the book unsettles me rather, and that is Mr Knightley’s age, or perhaps I should say, not so much his age as the fact that he has known Emma since she was born. In fact, he was practically an adult already, and there’s something icky about a man who watches a girl grow up and then falls in love with her. Large age differences were very common in those days, not even worthy of comment (it was disparity of wealth/rank that got people agitated) and in a small, confined society, such things must have happened a great deal, but even so, I found it a little unsettling.

Overall, I can recommend both of these versions, but if I had to pick just one, I’d probably plump for the Beckinsale variant by a whisker.