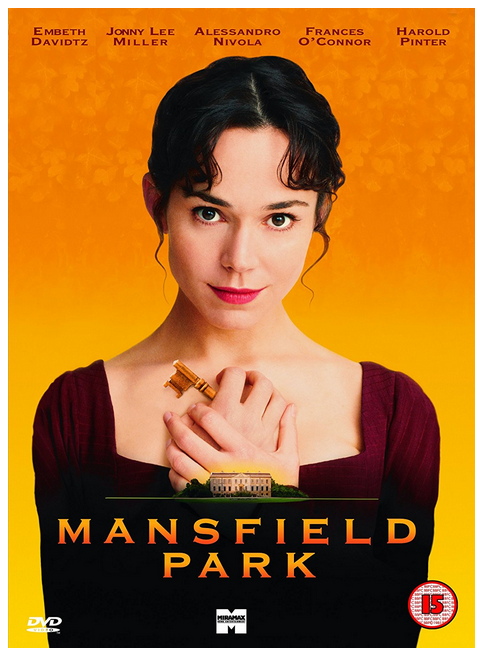 Now, this is what happens when people allow modern sensibilities to infuse a story that worked perfectly well when set in its own time: you get a muddled arrangement that makes no sense whatsoever.

The story is an interesting one: of three well-brought-up sisters, one married a wealthy baronet, one married a clergyman and one married a poor man, for love. The eldest daughter of the married-for-love sister is taken to live with her cousins at the baronet’s house. The contrast between the impoverished Price family and the wealthy Bertram family at Mansfield Park is very striking. I wondered a little how Mrs Price ever managed to meet and fall in love with quite such a poor man, who would surely not have been within her orbit in the regular way, but maybe this is explained in the book (which I haven’t read in a long time). Suffice it to say that the Price family live in squalor.

The Bertram family at Mansfield Park live a very different life, the usual idleness of the wealthy in those days, with every need met. Fanny, however, as the poor relation, is treated at an unpaid servant. Her two aunts have no affection for her. Lady Bertram is indolent, and Mrs Norris, the clergyman’s wife, lives off the largesse of her richer neighbours, and is concerned only to keep Fanny in her place and make sure she doesn’t get ideas above her station. Sir Thomas barely notices her, and of the four cousins, only Edmund is kind to Fanny. This part of the story is heart-wrenching but it must have been commonplace in that era.

The adult Fanny is the target of the worldly Henry Crawford, who sets out to flirt with her but ends up falling thoroughly in love with her. But Fanny is armoured against his advances by her love for Edmund – unrequited, since he is in love with Henry’s equally worldly sister, Mary. And here is where the original wobbles slightly. Having set up, right from the start, the ghastly consequences of marrying for love without consideration of wealth in Fanny’s own dire family circumstances, yet the moral of the story seems to be – screw that, hold out for a love match anyway. For Fanny rejects the eligible Henry, a marriage which would undoubtedly have lifted her own family out of poverty, and is so determined not to marry without love that she goes back to live with her own family again, sharing their insect-riddled home and actually adding to their burdens. It doesn’t seem to fit with her unselfish nature (but maybe the book explains it better). So, mixed messages, there.

Now, I don’t remember the book well, but I know that Fanny’s sweetness, innocence and good-nature are contrasted strongly with the dissolute and selfish natures of the rest of the family, Edmund excepted. She is shy and retiring in company, never putting herself forward. This is not the sort of heroine to appeal to modern audiences, however, so the scriptwriter has turned her into a feisty, spirited 21st century lass, boisterous and hoydenish, writing quirky novels in private, with Edmund as her audience. She manages (somehow) to also be retiring in company, but even this is jettisoned later in the film when she starts getting snippy with people. It’s very difficult to make a coherent story when you throw out the central tenet, and the entire character of the lead, and this, for me, is why the film fails.

The secondary change from the book is perhaps less problematic. Sir Thomas Bertram’s wealth derives from his plantation in Antigua, worked by slaves, and Fanny is imbued with all the modern antipathy towards the slave trade. This isn’t quite so out of line with the era, for there was a well-established and increasingly vocal anti-slavery movement dating from well before Jane Austen’s time, but whether a quietly-brought-up girl like Fanny would have known anything about it or taken much interest in the subject is moot. More likely she would simply have accepted it as a background part of the world she lived in, and had nothing to do with the politics of the day. Still, it was (probably) a topic for discussion in many households, and Edmund’s comment that they all lived on the wealth of the slave-managed plantation is a good summary of the situation. The book of drawings that Fanny later finds is a completely unnecessary addition to this aspect of the film.

Of the film itself, it’s hard to fault the settings, costumes or casting. The acting was as you’d expect. Perhaps only Harold Pinter, as Sir Thomas Bertram, rose above the general level of competence to put in an outstanding performance.

Overall, it’s possibly a worthy attempt to re-imagine a classic work in a way that appeals to modern audiences, but I can’t say I enjoyed it very much. I feel that more subtlety makes a far stronger point; it’s often only when one sees the accepted attitudes of earlier eras portrayed with unflinching accuracy that one appreciates just how far we’ve come. There’s a lot to be said for playing it straight, when portraying the classics on film or for TV. After all, there’s a good reason why they’re classics, so maybe it’s better not to try to ‘improve’ upon them.