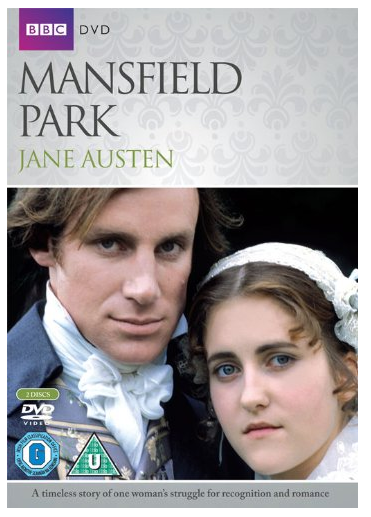 Mansfield Park is the book I know least about, and the one I’ve seen least performed, so I’m not even terribly clear about the plot details, never mind nuances of dialogue use and so on. This is a 6-part series, and after the first episode I really thought I wasn’t going to enjoy it much at all. But it grew on me, and by about part 4 I was really into it. With so much time, the story really was able to take its time and expand enough for me to understand the story and the characters better.

Let me talk first about Fanny and Edmund. I know it’s shallow of me, but I felt both of them were miscast on appearance alone. Nicholas Farrell (Edmund) has a wonderfully strong face, but it’s better suited to character roles than that of young hero. Sylvestra Le Touzel (Fanny) just didn’t fit my mental image of the character. With all the talk of her health, and not being strong, I always envisaged her as a dainty, delicate little thing, and Le Touzel is too robustly healthy, to my mind. See, I told you it was shallow. I have no criticism of their acting skills, although perhaps neither had quite the emotional range that was required at times of high drama. Fanny in particular was too often immobile (although that is no doubt how she was directed to act).

Of the other characters, Anna Massey stole the show as Mrs Norris, a wonderful performance, although it’s so well-written by the author that it would be a plum role for any actress. I also liked Lady Bertram (a minority view, I think). I wondered if her extreme indolence was either an illness, or perhaps a dependence on laudanum (opium). But I loved her fluttering hands and the tremor in her voice and her complete inability to do anything for herself. The contrast with Mrs Norris was delightful. I also liked Mrs Price in Portsmouth, although her husband was a dreadful caricature, and overacted to boot.

Another character who shone was Jackie Smith-Wood as Mary Crawford. I’ve never taken much notice of her in previous versions, or in the book, but here I felt her intelligence and underlying good nature shone through. I liked, too, that Edmund is finally turned against her by a want of principle on her part. It isn’t necessary for her to demonstrate it, but simply the opinions she expresses are enough to sink his esteem. Whereas Henry Crawford has to prove how shallow and stupid he is by running away with Maria Rushworth. To be honest, I always felt this was a flaw in the book, for surely Henry would never do anything to sink his chances of making a respectable marriage. I couldn’t quite work out whether he truly loved Fanny and might have been redeemed if he had married her, or if he just thought he was in love or was merely piqued because she wouldn’t have him. He turned back to his flirtatious ways soon enough when he was away from her. In this version, Fanny’s trip home is not so much a punishment for her ingratitude in refusing Henry, but an opportunity to see what she has left behind, and to reflect on her options.

Honourable mentions go to Bernard Hepton as a very gentlemanly Sir Thomas Bertram, and poor Mr Rushworth, a stupid but perfectly respectable young man, whose bewildered pursuit of Maria and Henry in the grounds of his house made me very sympathetic towards him. He really didn’t deserve what happened to him.

One surprising aspect that was done spectacularly well – the costumes. The men’s costumes in particular were glorious, perfectly fitted to their characters. I wasn’t too sure that Mrs Norris would wear quite such an old-fashioned style of gown, for it was a point of honour amongst the gentry to have the most fashionable attire that you could afford, but it rather suited her bustling nature to wear something so full-skirted and swishy, rather than the tight empire-line dresses, so unflattering to the older lady. Mary Crawford wore an array of wonderful clothes, sharply stylish, direct from the most fashionable modistes of London, which were a nice contrast with Fanny’s much plainer and more feminine gowns.

And a very small detail that absolutely delighted me – this version shows a proper, Regency waltz. We are so familiar with the modern ballroom waltz and the face-to-face positioning of the couple that we’ve come to expect it, but that’s not how it was when it first appeared. The couple stood initially side by side, or (more accurately) hip to hip, gazing into each other’s eyes, holding hands but with one arm raised, with a variety of changes of position during the dance, which might increase in tempo so the couples are moving faster and faster towards the end. A very different style of dance! It was lovely to see it done properly.

An excellent version, the only weakness for me being the miscasting of the lead characters.