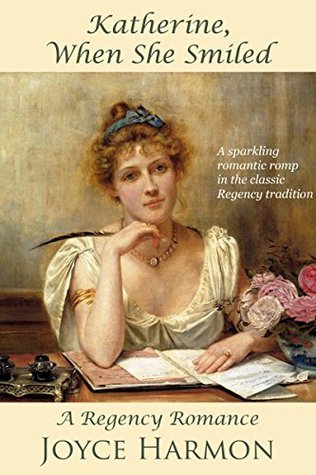 Every Joyce Harmon book is a delight and this one is no exception. For anyone looking for a substitute for Georgette Heyer, here’s an author who might just fit the bill. She has a light hand with dialogue, a strong array of characters and plots that effortlessly unfurl. This one eschews the standard Regency settings of society London or Bath, being firmly set in a small village, but that makes it a gentler, more affectionate look at Regency life. And it’s very, very funny. I do love a book which makes me chuckle all the way through.

Heroine Katherine is the oldest of her family, now orphaned by the recent death of her father. But amongst his scholarly papers she finds a half-written Gothic novel, the latest in a long line of them, by which her father had secretly been supporting his family. Katherine realises that, to keep a roof over their heads, she has to continue her father’s novel-writing career.

Our hero is the long-awaited brother of a duke, a soldier returning from the wars to claim his estate and find himself a suitable wife. The ladies of the village have their own ideas on the subject of suitability, and handsome Lord Charles sets many a female heart a-fluttering – except for Katherine, who’s busy fending off the attentions of the worthy young vicar while shouldering all the burdens of her family.

As with Heyer, the subplots, which involve a couple of boys behaving boyishly and much Gothic fun and games, tend to overshadow the romance at times, and although we see Charles’ moment of revelation regarding Katherine, we never see hers towards him (or at least, it is so understated as to be almost invisible), which was a great pity. I do like to see the protagonists inching towards an understanding. But both of them behaved with intelligence and common sense, no one acted stupidly in pique and (hallelujah!) there were no contrived misunderstandings.

Some of the loose ends tidied up and the other pairings resulting seemed a little too convenient to me, but I won’t quibble. There were a very few typos, and a smattering of Americanisms (gotten, fall instead of autumn), but Harmon has such a strong grasp of the Regency era that it never bothered me. This is a lovely traditional Regency, very much in the style of Georgette Heyer, and I highly recommend it, and all Harmon’s books, to all Heyer fans. Five stars.

2 responses to “Review: Katherine When She Smiled by Joyce Harmon [Trad]”