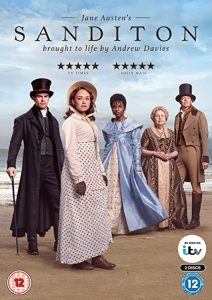 For some reason, I never wrote a review of this when I first watched it (probably I was too annoyed at the ending), but now that I’ve watched it twice, I’m no better pleased with it. It takes the fragment that Jane Austen wrote and spins it into a yarn that encompasses all the essentials of modern TV drama – sex, money, ambition, greed, selfishness, high action, pretty costumes and some very good looking actors. Oh, and a smattering of racism and the obligatory denunciation of slavery. There is precisely one decent character in the whole production (I don’t count heroine Charlotte; she’s a dope). The word that springs to mind is sordid.

The basic plot is straight from Jane Austen – Tom Parker is obsessed with promoting his seaside home of Sanditon as England’s best resort. He’s supported financially by Lady Denham, who is obsessed with money. She has several relatives, Sir Edward Denham, Miss Denham and poor relation Clara Brereton, who are also obsessed with money – specifically Lady Denham’s, which they all want a share of. Heiress Miss Lambe is another target for the money-obsessed. There are also several members of the Parker family, namely brother Sydney, the indolent man-about-town and rather uninspiring hero, and hypochondriacs Arthur and Diana. Charlotte Heywood is the country innocent dropped into racy Sanditon, who immediately gets the hots for sophisticated Sydney.

So far, this is straight from the early chapters that Jane Austen wrote. But the TV show introduces another layer of society, one that never featured at all in any of Austen’s completed works, except as brief walk-on parts. Because Sanditon is still under construction, we get the builders, and an alternative suitor for Charlotte in nice Mr Stringer, the foreman with ambitions to be an architect. And the script-writers couldn’t resist another money-related situation – the workers haven’t been paid for weeks and are getting stroppy about it. Tom Parker keeps promising more men and money, but he just can’t afford it. This strikes me as odd, because labourer’s wages were peanuts in those days. A labourer would have made perhaps ten shillings (half of a pound) a week. If there were fifty men, which seems unlikely, that’s a cost of twenty five pounds a week, something that Parker could have found by selling a vase or two from his house. It was the stone frontages and marble fireplaces that cost the earth in housebuilding in those days. Besides, labourers couldn’t afford to work for nothing – they had families to feed, and without money each week they starved. They’d have been off the first week there was no pay.

But I digress. I’ve mentioned already that there is only one decent character in the production, and I’ll come to him in a minute. The rest are all either fools (Tom Parker, Arthur and Diana) or nasty (Lady Denham, Sir Edward, Miss Denham, Clara Brereton) or silly (Charlotte, Miss Lambe). I’m going to put Sydney in the nasty category, because he’s unforgivably rude to Charlotte in the early episodes, he flip-flops about between grudgingly admiring her and yelling at her, and then betrays her horribly at the end. But what about that nice Mr Stringer, yearning soulfully after Charlotte? He’s pretty silly, because when he’s offered the chance of an architecture apprenticeship (did they do that in those days? I guess they did), he turns it down for stupidly sentimental reasons.

So, to the one decent character. Sydney brings some friends to Sanditon to support his brother’s endeavour. One of them is an amusing drunk, and hallelujah for some humour. The other is Lord Babbington, rich, titled, single and smitten instantly with the disdainful Miss Denham. He spends the whole series chasing her with single-minded and unreserved devotion, and is an utter delight. It may be that he only strikes me that way because everyone else is so relentlessly awful, but whatever. I liked him, and I cheered when he finally got his girl.

But the rest of it? No. The costumes are OK (I particularly liked Lady Denham’s old-fashioned styles), but as with all modern productions now, the hero is trendily unshaven, and Charlotte goes around with her hair down most of the time. I get that she’s supposed to be unsophisticated, but it’s plain wrong. A girl put her hair up when she came out into society, and it never came down again outside the bedchamber. There’s a carriage chase scene which is hysterically funny (as in so bad it’s funny). There’s a fair amount of gratuitous nudity but that’s expected these days. The music at the balls was just weird, but I suppose they were making some point or other. I don’t quite see the purpose in pretending to do Jane Austen, and then throwing out half the historical details (unless you do it in style, a la Bridgerton).

And the ending is an abomination. I watched it in the UK before it reached the US, and I actually warned my American friends not to watch the final episode with anything breakable in their hands, because it would inevitably be thrown at the TV. To repeat – the ending is an ABOMINATION. Worse than Lost, which is saying something. So not one for traditionalists, and be prepared to imagine your own ending.