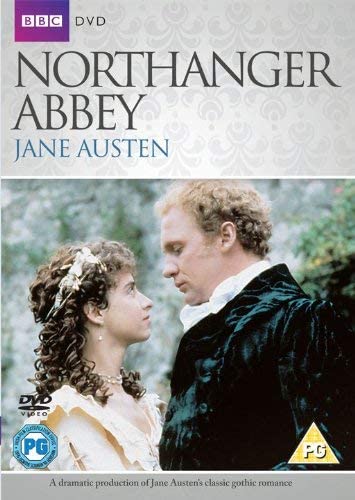 I can’t believe I missed this adaptation, since I have pretty much every other one in existence, but there it is. I’m only just discovering it now. Northanger Abbey is one of the least adapted of Jane Austen’s complete novels, and it’s easy to see why. The heroine, Catherine Morland, is a seventeen year old ingenue whose dull country life has been enlivened by much avid reading of Gothic novels. As a result, she sees melodrama everywhere and is pretty silly as a result. She’s not really a heroine that modern readers can root for (unlike spirited Elizabeth Bennet, or steadfast and sensible Anne Elliott, for example). She doesn’t even have Emma’s get-up-and-go. She’s more of a Fanny Price, only without the intelligence and moral compass. And of course the Gothic novel, which this is a pastiche of, is somewhat out of fashion these days.

On the other hand, it has one of the most charming heroes. Henry Tilney has the great virtue of being faithfully in love with the heroine throughout the book, and is uniformly kind to her. In the 2007 version, the script gives Henry a delicious sense of humour, which makes him perfectly easy to see as a romantic hero. In this version, his lines, while slightly quirky, are much heavier and it sometimes felt as if he were actually poking fun at innocent Catherine. I’m not sure how much of this is lifted from the book, but if I’d been her, I might have been a bit miffed at him and not fallen for him quite so much.

In a 90 minute adaptation, a lot of nuance has to be left by the wayside, and so it is here. The Thorpes, in particular, get very short shrift, and their machinations to detach Catherine from the Tilneys and keep her to themselves are dealt with in cavalier fashion. Isabella is portrayed as the worst and most obvious kind of avaricious minx, with no room for the subtlety of the situation at all. She’s engaged to Catherine’s brother, and the next thing we see is her making up outrageously to Captain Tilney. Five minutes later the engagement is off. So it’s all a bit rushed.

In compensation, the Northanger Abbey scenes are well drawn, especially the confrontation between Catherine and Henry in his mother’s room. I liked Robert Hardy at General Tilney (has Robert Hardy ever underperformed? I can’t remember a time, and he does bumbling fool, as in Emma Thompson’s Sense and Sensibility, just as well as menacing patriarch, as here). I also liked that Eleanor Tilney, an easy role to airbrush out, is here given room to breath. The actress conveys very well the dutiful daughter, rather afraid of her father but also determined to go her own way. The Allens and the Morlands both do well with the limited scope of their roles.

Some niggles. Henry is here not a clergyman, but a gentleman of independent means with his own estate. I understand that modern audiences would not appreciate that a clergyman has a solid position in society and may well be comfortably off, even if not exactly wealthy, since the church was not a vocation in Regency times, more of a sensible career for younger sons. The movie also skates over the insult to Catherine of sending her home, quite alone, on the common stage, an unthinkable thing to do at the time. I suspect that the scriptwriters perhaps were not quite familiar with these nuances. They also made Catherine something of an heiress, giving her the same four hundred a year that her brother would have had if he had married Isabella Thorpe. I’m not familiar enough with the book to know whether that’s canonical or a fabrication, but it seems an excessive amount for a daughter in such a large family.

I have to say I enjoyed this a lot. There was nothing that struck me as completely wrong, the acting, costumes, script and settings (actual Bath!) were lovely, and my only grumble was that Henry was so quirky that I wasn’t entirely sure if he was being complimentary or insulting to Catherine. And she had the sort of blank expression that I’m sure was supposed to be innocent bewilderment, but would in certain parts of the UK be described as gormless. But a good adaptation, overall.