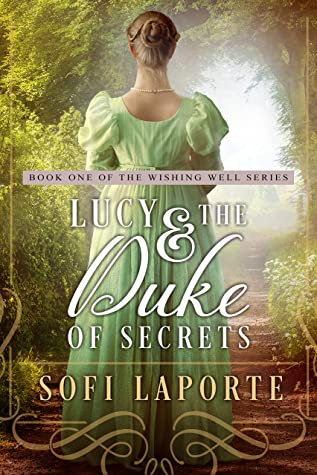 I tripped over this while bouncing around Amazon, looking for a modern Regency that isn’t predictable and/or boring. And oh boy, is this ever NOT predictable or boring! What it is, though, is funny – and not just witty or chuckle-worthy, but laugh till you cry funny. I’d like twenty more just like this, please.

Here’s the premise: penniless Lucy Bell is on her way to visit a schoolfriend, who happens to be the sister to a duke. A duke, moreover, whom Lucy hates with a passion because he got her thrown out of her school where she was entirely happy, and was then left to fend for herself. Which didn’t work out too well, because Lucy is a one-woman tornado, who sows chaos and confusion and catastrophe all around her. Even a simple journey falls apart, for she finds herself stranded some miles from Ashmore Hall, where her friend lives, with night falling and no money for an inn.

But happily, there’s a man loading up a wagon with plants who seems to be going the right way. Surely he’ll give her a lift? At first, he refuses in the most abrupt way, but eventually he relents, and Lucy chatters away to him happily, while he grumps away beside her. She discovers that he’s a gardener at Ashmore Hall, and his name is Henry. He’s handsome, too, which can’t hurt, and she finds she rather likes him, despite the grumping (the blurb describes him as charming, but he really isn’t; tolerant of her mishaps, perhaps, but grumbling constantly). For various wacky reasons (see previous remarks about Lucy the one-woman tornado), they end up spending the night together in a farmer’s barn, and telling stories and (eventually) kissing.

The next morning, she arrives at Ashmore Hall, and after only the minor mishap of being mistaken for a servant and spending the morning cleaning fireplaces and dusting, she is reunited with her friend, Lady Arabella. Henry, meanwhile, disappears about his gardener’s tasks, she supposes. Lucy has arrived just as a house party is getting under way, to finagle the betrothals of the duke to a cold fish aristocrat, and Arabella to a beautiful but soulless lord. Reluctantly, Lucy is drawn into the house party, where she is shocked to discover that Henry, the grumpily charming and very kissable gardener, is actually the icily cold and rigidly polite Duke of Ashmore, who fails even to acknowledge their previous acquaintance. The reader is slightly less shocked by this discovery, since it is given away in the book’s blurb, so I’m not revealing spoilers here.

From then onwards, Lucy unleashes her disruptive force all over the duke’s household, but particularly at the duke himself. I won’t spoil the surprise by revealing everything she does, but it’s gloriously funny, and culminates in a humdinger of a row between the two of them, at midnight, and in full view of half the household. It’s absolutely wonderful, and when the dowager duchess describes it as a lover’s quarrel, she’s absolutely right, because it crackles with that kind of tension. Lucy’s problem is that she’s in love with Henry the gardener, with whom she feels she could actually aspire to marriage, but still hates the duke, who is obnoxious towards her at every verse end. And Henry’s problem is that old chestnut, a hero who doesn’t realise he’s in love at all. Silly man.

And then everything turns soggy. A certain amount of misunderstanding or keeping of secrets I can accept, but there comes a point in any book where the protagonists, if they are sensible, sit down and talk things through. They don’t continue to not tell each other vital pieces of information, and they don’t, under any circumstances, do noble, self-sacrificing things for the other’s good. Nor do they withhold exciting news when they have it, or leave the object of their affection stewing in misery. So although it comes right in the end, I wasn’t happy about it at all.

Sofi Laporte seems to be a new author, and I for one will certainly be reading more of her work. If this is a debut, it’s a brilliantly accomplished one. I’d have given it five stars, despite the implausibility of some of it, but that soggy ending and a high level of editing errors keeps it to four.