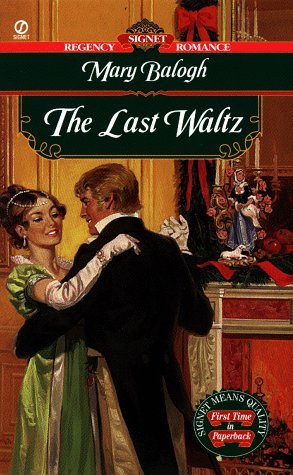 Mary Balogh has an unerring instinct for creating gloriously convoluted situations for her characters to face up to, and here she does it again. Ten years ago, Christina and Gerard were seemingly deep in love and on the brink of a betrothal when she abruptly agreed to marry his cousin, Gilbert, the Earl of Wanstead. Now Gilbert and his younger brother have both died, Christina produced only daughters, and Gerard has inherited the title and Thornwood, where he proposes to hold a house party over Christmas to choose a bride. His hostess? That will have to be Christina, the widowed Lady Wanstead.

This is a delicious situation, of course. He thinks she’s a cold-hearted mercenary witch, who chose security and a title over love. She thinks he’s a rake and a wastrel. Neither view is accurate, but it takes the whole book for this to emerge, and the reasons for the misunderstanding. Like all misunderstandings, one has to question the intelligence of people who, whatever the circumstances, allow themselves to be herded in a different direction so passively. Given the supposed closeness of the relationship, why on earth didn’t they talk to each other?

What becomes obvious much sooner, however, is that Christina had a miserable marriage. Her husband was a deeply pious and controlling man, cut in the mould of the strictest of Puritans, so that there was no pleasure allowed in the house. If Christina wanted new clothes for herself or her daughters, she had to ask for and justify every penny, a humiliating experience. Rules were set and had to be adhered to or the transgressor would be punished. It takes her a while to realise that Gerard is not at all the same, and although he sets the rules in his own house too, they are generous and kindly ones. Gradually Christina and her daughters emerge from their shell a little bit.

And very gradually, inch by cautious inch, the two begin to rebuild the rapport they once shared into something they can live with. But first they have to bring closure to the past – don’t they? Since this is Balogh, it’s not really a spoiler to reveal that sex comes into it, and traditionalists should note that it’s fairly graphic. And here we have the biggest logic fail I’ve come across in many a year. Their idea of closure is such an epically stupid thing to do that in other hands it might be a book-meets-wall moment. Mary Balogh is such a brilliant writer that if she told me that black was white I’d be almost prepared to take her word for it, but even she can’t make this work. I do see what she was aiming for, and she writes it so well that after an exasperated sigh or two I read on, but nothing really justifies it.

After that, it’s onwards to the last waltz of the title, the resolution of the final remaining misunderstandings and the inevitable melodramatic happy ending. Fortunately, this and the earlier parts of the book are mostly enough to compensate for that logic fail. Four stars.