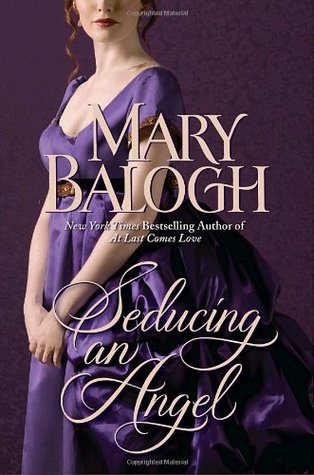 Every Mary Balogh book is worth reading, but they do vary in likeability. The previous three books in this series I rated 5*, 3* and 4*. This one is back to 5* for me, mainly because I liked both the main characters, the romance was a pleasant slow burn, and there were no huge implausibilities in the plot. There was altogether too much angst, but that’s par for the course, and there was the bonus of the hero’s three sisters busily being older-sister-ish, plus several lovely minor characters.

Here’s the premise: Cassandra, Lady Paget, is widowed and in trouble. Her promised dower income, houses and jewellery are being withheld by her late husband’s eldest son, because she’s alleged to have murdered her husband with an axe. Without money, friends or relations willing to help her, she is practically destitute. In desperation, she sets out to find herself a rich, well-born lover to keep her as his mistress. Gate-crashing a society ball, she spots the angelic-looking Stephen, the Earl of Merton, and sets out to seduce him. And she succeeds – up to a point, for he ends up bedding her and accepts her arrangement. But then second thoughts set in when he hears her story, and he decides that what she needs most is a friend who will help her rehabilitate herself in society.

And that is precisely what he sets out to do, squiring her about town, ensuring she is invited to every ton event and enlisting his sisters’ help in the project. Stephen is the angel of the title, and yes, he’s terribly angelic because although he’s paying her as a mistress, he isn’t taking advantage of that at all. In fact, he’s a thoroughly nice guy, somewhat guilty because he was drawn into the original seduction, and determined to do the right thing by her. Although of course he’s hugely attracted to her, and so he ends up dancing her onto the balcony at a ball and kissing her… whereupon they are promptly spotted and bounced into a betrothal.

I’ve never understood why any well-brought-up gentleman would find himself in that position. I can see why a woman might try to get herself ‘compromised’ to get a husband, because women had so little control over the process, but a man knows the consequences if he steps out of line, so why let yourself get into that position? Unless you choose to, of course. And perhaps Stephen subconsciously wanted to make things right with Cassie, and make an honest woman of her. In any event, he at once announces their betrothal, and even though Cassie assures him she will break things off at a suitable moment, he is determined to make it happen. And his sisters are equally determined.

From then onwards, the story becomes a straightforward courtship, and despite the protestations of the lady, there’s never any real doubt of how it will end. As always with Balogh, the dialogue is superb, and this turned into a real page-turner for me. Five stars. As with all Balogh books, there’s some graphic sex.