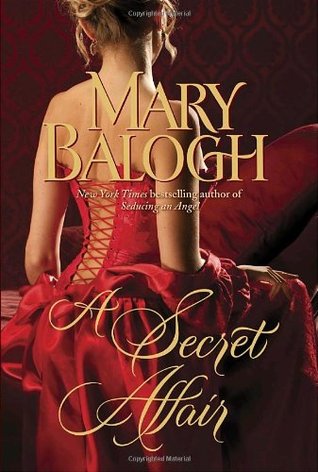 Surprisingly, this book opens with almost the same plot as the previous book in the series, with a young widow deciding to take a lover. The reasons are different, and the characters are very different, but it’s still an odd choice and felt awkward to me.

Here’s the premise: Hannah, the Duchess of Dunbarton, is a widow at thirty, the elderly duke she married at nineteen dead. She’s determined to enjoy her freedom by taking a lover, and she knows just who she wants – the dangerous but seductive rake, Constantine Huxtable. Had Constantine been born two days later, he would have inherited his father’s earldom; instead he’s illegitimate, living a wild life and taking a new mistress every season. Hannah is determined to be his choice that year, and he’s content to go along with it. Their manoeuvring for advantage in the negotiating stage of their affair is perhaps the highlight of the book.

The other element I enjoyed was uncovering the truth about Hannah’s marriage. She’s widely believed to have married the duke for financial security and rank, and to have been repeatedly unfaithful to him. I found the real story much more interesting and a refreshing take on such April-to-December marriages. The reason for the marriage becomes clear only quite late in the book.
Constantine is a far less interesting character. The rake is such a staple of Regency romances, but almost invariably he turns out to be a pussy cat masquerading as a tiger. I would like it if, just once, these supposedly dangerous men would actually be dangerous, and not thoroughgoing heroes. It’s so boring.

My other complaint is a practical one. These two engage in a very active affair without either of them giving a single thought to the possibility of pregnancy. Any real arrangement between a man and his mistress would have to make some allowance for children. She’s a widowed duchess, after all, and a leading light of the social scene. An illegitimate child would cause no end of a scandal, and would be impossible to keep quiet. She would be ruined. Yet the only even sideways mention of the subject is when she expresses pleasure that her period arrived when she was away from her lover, so their bedroom sessions wouldn’t be disrupted!

Needless to say, the two lovers really do fall in love as the book progresses. She learns to shed the icy-cold and brittle exterior she generally shows the world and he, too, learns to reveal his true nature. The ending is, frankly, rather schmaltzy and saccharine, a little too sweet for my taste, but Balogh’s writing is, as always, superb. Four stars. As always with Balogh, there are sex scenes.